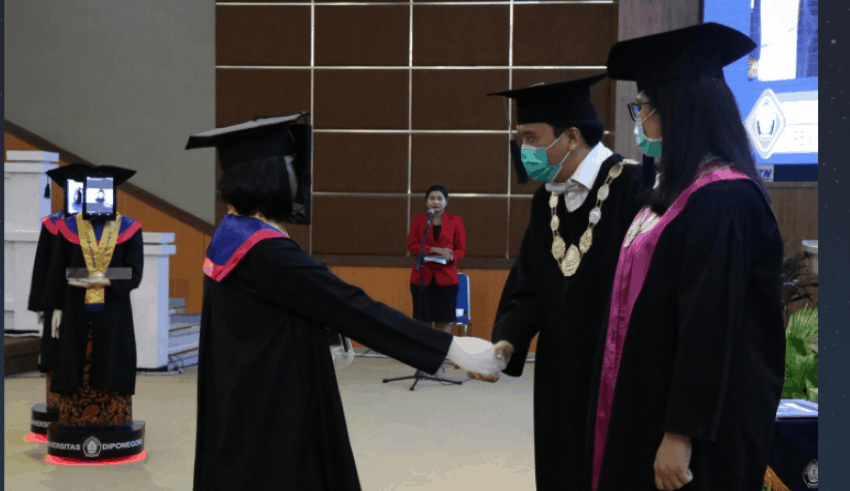 The graduation program was held virtual by presenting three robot displays which replaced the physical presence of graduates who could not attend the graduation ceremony due to a number of Covid-19 pandemic policies in an effort to prevent transmission of the coronavirus.

The design of the robots was similar to the graduates, wearing complete toga clothes. The face of the robot was made with a 10-inch tablet screen, this screen will later be used to show the face of the actual graduates utilizing video call applications. With this application, robots can be invited to communicate both ways.

The 160 cm-tall-robot stands on a box equipped with wheels and propulsion engines with power coming from batteries. To run the robot back and forth and spinning using a remote control that can be controlled from a distance of up to 15 meters.

“We have designed this robot to resemble actual graduates, including the ability of one hand to be able to shake hands with the Rector, as well as the other hand to receive the given diploma. This robot is operationalized by one person who moves the robot back and forth as well as moving its hand, “explained Rofiq C. Prayoga, ST as one of the members of the research team who is also part of the Undip’s robotic alumni team.

This graduation robot is a development of robot researched for hospitals that are specifically designed to assist medical staff in delivering food and medicines for Covid-19 patients, as well as to communicate both ways between patients and medical personnel.

Robotic research for hospitals which was developed since March 2020, was then continued with robot research for graduations. The research and development activities of these robots are part of the research activities carried out by the Center for Higher Education Science and Technology (PUI PT) Health Technology Center for Bio Mechanics, Bio Materials, Bio Mechatronics, and Bio Signal Processing (CBIOM3S) at under the leadership of Dr. Rifky Ismail ST MT as the head of the institution.

Rifky on the sidelines of the graduation procession said, initially this idea came from the rector and vice-rector. ‘’ Somewhat suddenly. How about graduation later in the middle of the Corona pandemic, we make robots to represent graduates. There are interactive media. Let there be a kind of two-way communication with the graduates, ” said Rifki imitating the rector.

The Robots that come with the interactive media, make them can be connected to shake hands and face to face between graduates and the Rector.