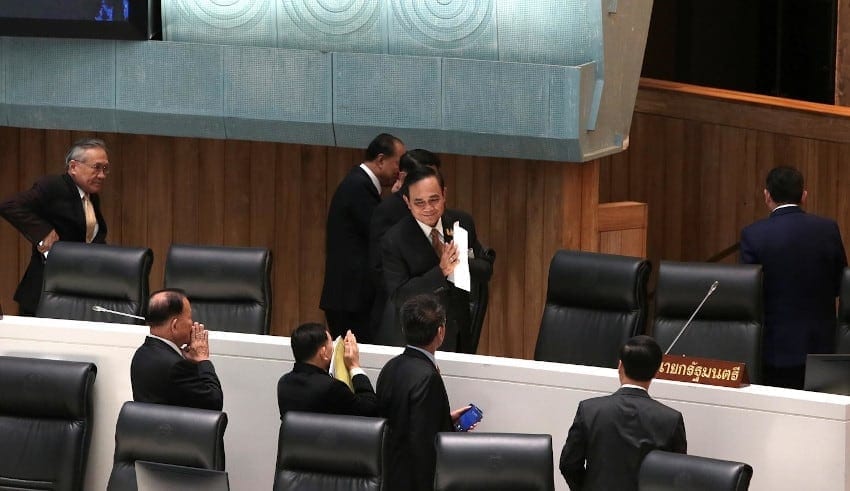 Gen Prayut and five other cabinet ministers survived the no-confidence vote, though two were not grilled during the four-day debate. Deputy Prime Minister Prawit Wongsuwon walked away with 277 out of 329, or the highest number of votes, even though his performance never came up in the debate, while Capt Thamanat got the fewest votes — 269 out of 331.

MP Sathit Wongnongtoey, one of the 17 Democrat MPs who doubted Capt Thamanat, said the group wanted to indicate that it was time Gen Prayut took action, especially since Capt Thamanat did not win much confidence. “We hope the prime minister will listen and think again … because the government’s stability depends on the confidence of the people. We are concerned about the matter because the government’s image is also linked to that of a cabinet minister,” Mr Sathit said.

Capt Thamanat, a key figure in the ruling Palang Pracharath Party (PPRP), was one of six ministers targeted in the debate, and when grilled on Thursday, he strongly denied he was imprisoned for drug trafficking in Australia. He also claimed the opposition MPs had omitted certain information when discussing the case he was implicated in. Before the vote, Capt Thamanat said he wasn’t worried about its results, saying he had done his best to explain himself.

The opposition bloc, with the exception of former MPs of the now-dissolved FFP, Seri Ruam Thai Party and some members of Pheu Thai Party, boycotted the vote yesterday after their request for a debate extension was rejected by Deputy House Speaker Supachai Phosu. But most MPs of the disbanded FFP ignored the boycott and voted against Gen Prayut and the five other ministers, including Gen Prawit and Gen Anupong.

After the debate ended on Thursday evening, two former FFP MPs, who wanted to grill Gen Prawit and Gen Anupong but were not given the chance, took their debate notes outside to show reporters what they had prepared.

However, though they spoke their minds freely outside the House, they risk being sued as they were not covered by MP immunity.