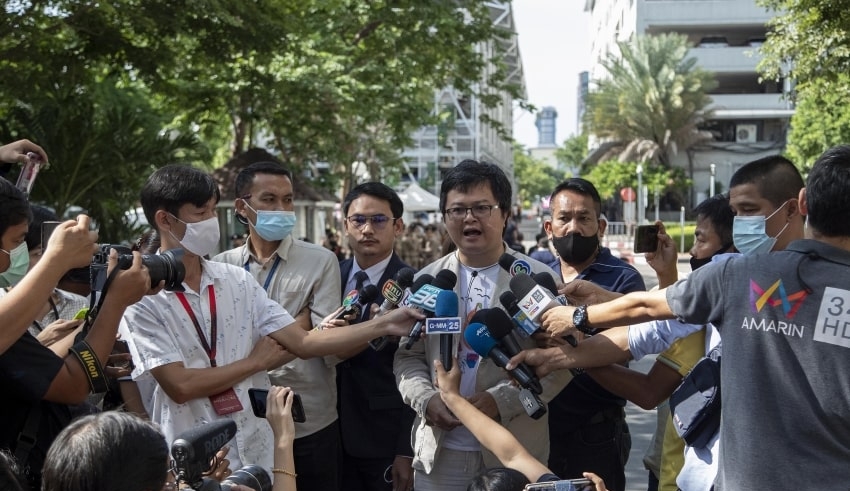 Human rights lawyer Anon Nampa and activist Panupong Jadnok were detained after their bail was revoked by a court, and refused to reapply.
(C) Shout China Morning Post

Human rights lawyer Anon Nampa and activist Panupong Jadnok were detained after their bail was revoked by a court, and refused to reapply. Thursday morning, the Criminal Court deliberated on the request by the Samran Rat police to revoke their bail. Officials claimed that by committing offenses similar to what they had been accused of, they had violated the bail conditions. Police submitted on 8 and 10 Aug, respectively, as evidence clips of Mr Anon ‘s speeches at pro-democracy rallies in Chiang Mai and Thammasat University.

For Mr Anon, 35, the court revoked the bail saying he agreed with the police. The court emphasized that he had yet to rule on his guilt he found that his acts were of the same sort as the previous case against him and that Mr Anon could still apply for bail. The lawyer did not take the bid though. He wrote instead a message to his followers that his job was done outside. According to him letting his detention be a proof of people’s coercion today, Come back to them on Sept. 19, 2020.

Another judge also treated Mr Panupong, 24, a Free Youth activist, violating the terms of his bail in another case. But considering his age, occupation and the act cited as the justification for revoking his bail, the harm to the case had not been done and the accused deserved another chance, the judge said.

It agreed to lift the guarantee to 200,000 baht and compel him to return to the court in 15 days. Mr Panupong did not take the bid, as did Mr Anon. They were sent to Remand Prison in Bangkok.

The court accepted their immediate releases on bail the next day, given they did not commit crimes in the same manner that led to their arrest in the first place. Both persisted in attending demonstrations, claiming that it was within their rights.