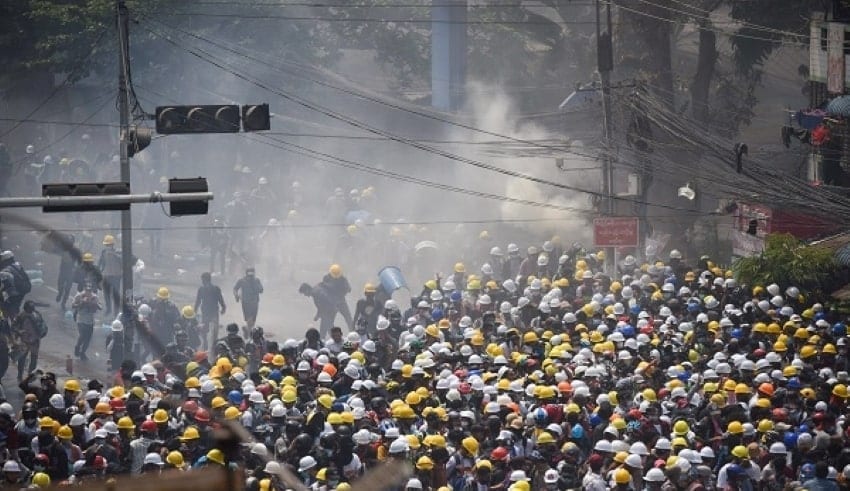 Southeast Asian foreign ministers are preparing for a special meeting with Myanmar’s ruling military on Tuesday in the hopes of quelling deadly violence and opening a channel to resolve the country’s worsening political crisis.

Early Tuesday, the streets of Myanmar’s largest city, Yangon, were mostly quiet ahead of what protesters expected would be another major demonstration. Several shopping centers have announced closures as a result of the unrest, including those in areas where demonstrations have occurred.

Witnesses said police used tear gas and stun grenades to disperse hundreds of demonstrators in Yangon on Monday, and then searched side streets with rubber bullets.

Senior General Min Aung Hlaing, the junta’s chief, said protest leaders and “instigators” would be disciplined and threatened action against civil servants who refused to work in remarks read on state television by a newscaster.

Min Aung Hlaing has announced that new elections will be held and that the winner will be granted control, but he has not specified a timetable.

His February 1 coup halted Myanmar’s tentative moves toward democracy after nearly 50 years of military rule, drawing criticism and sanctions from the US and other Western countries, as well as increasing alarm among the country’s neighbors.

Singapore Foreign Minister Vivian Balakrishnan said his ASEAN counterparts would be candid when they meet via video call on Tuesday, telling a representative of Myanmar’s military that they are appalled by the violence.

He said ASEAN would promote dialogue between Suu Kyi and the junta in a late Monday television interview.

“There is the political leadership … and there is the military leadership, on the other hand. They need to talk, and we need to help bring them together,” he said.

However, the anti-coup movement has slammed ASEAN’s attempts to negotiate with Myanmar’s military, including a committee of exiled lawmakers who have declared the junta a “terrorism” organization.