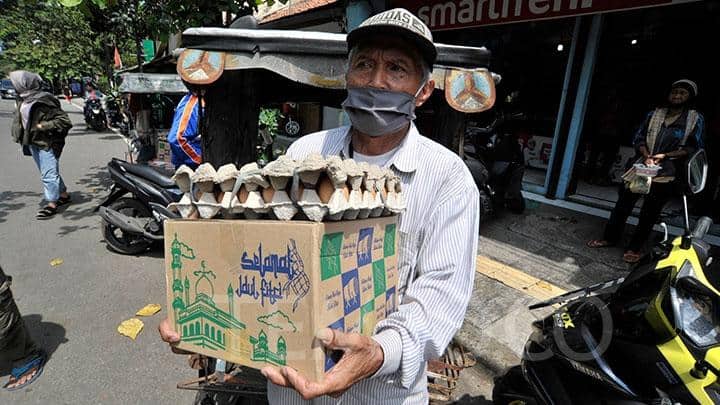 The distribution of staple foodstuffs will be completed before the city’s large-scale social restriction (PSBB) protocol is imposed on Friday.

“The Jakarta administration together with the military and police forces will distribute sembako for the poor and vulnerable groups who have their source of income be heavily affected by the coronavirus,” said the governor of Jakarta Anies Baswedan at a teleconference from the City Hall on Tuesday.

Previously, Anies promised to allocate direct cash assistance for the city’s underprivileged citizens that is hoped to fulfill their needs for the next two months. There will be 2.6 million of them and people in the informal work segment that receive cash assistance with total Rp4.58 trillion.

This plan has been agreed upon with the Social Affairs Ministry and will be distributed soon.

Aside from that, Anies Baswedan is amidst the process of preparing 105 markets bearing the crucial role to provide supply for Jakartans after PSBB is officially imposed on Friday.

“The Jakarta administration together with the entire regionally-owned enterprises (BUMD), especially the ones related to the fulfillment of the public’s needs, will provide remote shopping through the Pasar Jaya facility in 105 locations across Jakarta,” said Anies on Tuesday.

The governor explained what is essentially a remote-shopping concept that would both provide for people and not contradict the government’s call for people to stay home.

One of the businesses involved in the program is Food Station. According to Food Station president-director Arief Prasetyo, the products available in multiple e-commerce platforms. He said that many of Food Station products sold can be found in the form of complete packages containing staple foods, like Bukalapak, Blibli, Shoppee, and Tokopedia.

Previously, Governor Anies Baswedan on Tuesday said the Jakarta administration will spend two days disseminating the city’s stricter social restriction protocol before the large-scale social restriction (PSBB) is officially implemented on Friday, April 10. He has made the decision that is heavily influenced by the number of coronavirus cases in the Capital City and to further slash the chain of coronavirus (COVID-19) transmission.

PSBB was announced by the governor in a coordination meeting with the city’s regional leadership communication forum (Forkompimda) and law enforcers.

At the time, Anies explained that the PSBB and social distancing have similar in principle, retaining rules encouraging people to work, study, and conduct religious activities at home.

There is main difference between PSBB and the ongoing ‘social distancing’ protocol that Jakarta has implemented for that past month, namely the rules that regulate law enforcement for those who defy the social limitations overseen by the PSBB.

The previous social distancing protocol in Jakarta was mainly a public encouragement with no legally-binding regulations to be upheld.