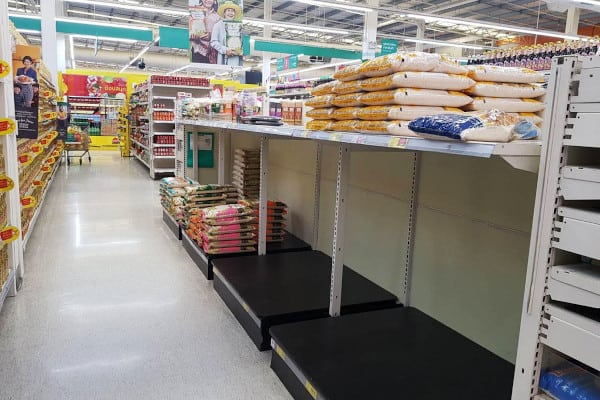 Large retail operators including Tops Supermarket, Tesco Lotus, The Mall Group and Big C Supercenter acknowledged that these items have been snapped up quickly since the weekend. They are also in consensus that fear of the deadly virus is the primary cause for the shopping spree.

The Mall Group says it has doubled the inventory of goods from a 15-day supply to 30 days to prevent shortages and ensure that consumers have a sufficient supply of the products they are looking for. A worker at the Gourmet Market in Siam Paragon, who asked not to be named, said shoppers were forming long queues at the tills to pay for groceries last weekend.

Workers at the Tops Chidlom branch, Big C Supercenter at Future Park Rangsit and Tesco Lotus on Nakhon In Road in Nonthaburi made similar observations of the buying phenomenon since last Friday. Mintita Thowkam, 33, a company employee, said she’s begun hoarding goods because she is afraid of the coronavirus and is not confident in the government’s measures to control the spread.

Thailand’s embassy in Seoul has been informed by the South Korean Immigration Office that more than 5,000 Thais reported to the office from December last year to March 1, according to the Foreign Ministry. “I’m quite worried about this, so I came to Tesco Lotus hypermarket for products to stock up for 1-2 months,” Ms Mintita said, adding that she also found some products missing from shelves on Tuesday, including Mama instant noodles with tom yum kung flavour. Pun Paniengvait, manager of the president’s office at Thai President Foods Plc, the maker of Mama instant noodles, said supplies are assured because total production capacity for all instant noodle brands, excluding imported products, is about 10 million packets a day.

Production utilisation is now 70-80%, so production could still be extended to 15 million packets per day. Per capita consumption of instant noodles in Thailand is about 45.9 packets per year.