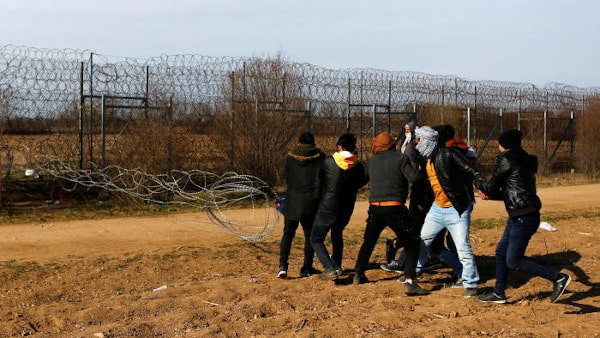 Turkey’s Erdogan’s decision last week to step back from a 2016 deal that halted the flow of migrants from the Middle East into Europe has reignited again the fears of a new crisis.

Erdogan claimed that the the numbers would reach around “25000-30000”.  He also added that Turkey will not close it’s doors and that EU should keep its promises. Greece responded back on Twitter, stating that the numbers cited by Turkey are “entirely false and misleading.” One Greek official even said that the deal is all but “dead” after the Athens government decided to suspend all asylum claims for a month and deploy troops on its borders to keep out migrants.

Turkey’s main complaint is that the EU has not kept to its side of the agreement which was to provide economic incentives and support in exchange for dealing with the surge amount of incoming refugees. Turkey added that the EU is not sending money to Turkey fast enough to respond to this crisis. Furthermore EU’s “economic incentives”, which includes making EU visas easier to obtain for Turkish citizens, increased of trade for Turkey, and the influence for Turkey join the EU bloc have yet to materialize.

EU rejected this claim and pointed out that Turkey’s complaints might have more to do with the money sent does not go directly to the Turkish government. EU’s Commission spokesperson pointing out that the EU had already committed over $6.6 billion dollars to handling the crisis, of which $3.5 billion has already been spent.

The Turkey deal was originally meant to give breathing space for Europe to come up with a sustainable system of handling the refugees, but Europe’s lack of progress has left it vulnerable, especially facing Mr Erdogan’s threats. Director of the Migration Policy Institute Europe think-tank, Hanne Beirens, said the EU’s model has been based heavily on cooperation with non-EU countries. “Now a third country is rearing its head and saying this is not enough — we want a different kind of deal.”