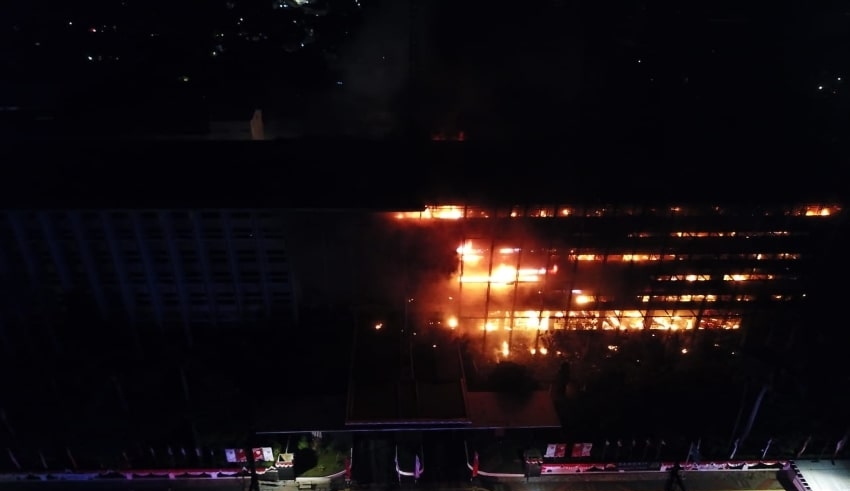 A fire broke out on the main building of the Attorney’s General Office (AGO) on Saturday.
(C) Jakarta post

A fire broke out on the main building of the Attorney’s General Office (AGO) on Saturday, August 22 evening and had lasted for more than 10 hours. The flames were finally extinguished, taking 65 fire engines and 325 personnel.

The fire has raised some question as AGO is currently undertaking an investigation of the largest corruption case in the country involving Djoko Tjandra, who has been convicted in Bank Bali case. Other than that, it is also investigating a corruption case on state-owned insurer Jiwasraya which has caused an approximate of Rp 16,81 trillion in state losses. Many has suspected that the fire was intentional in an attempt to destroy evidence, however the real reason of the fire is still being investigated.

Attorney General ST Burhanuddin did not dismiss the possibility of an arson but he insisted that he would rather wait for the investigation rather than jumping to conclusion. He stated the fire will not affect or postpone any of the ongoing investigation.

“The fire only affected the office of human resources, legal and planning development and the intelligence office.” he said.

Burhanuddin also claimed that all case dossiers are safe, and that evidences as well as case files are stored in two separate buildings, unaffected.

“We have a database, as well as data backups just in case incidents like this happen.”

Coordinating Political, Legal and Security Affairs Minister Mahfud MD has asked to stop any speculations as the National Police’s Criminal Investigation Department (Bareskrim) and the AGO’s junior attorney for general crimes were working together to investigate the fire and review the building’s construction feasibility.

“The safety of the data and case dossiers has been ensured by the AGO, and I, as the coordinating minister, will also oversee this carefully and follow the developments. The cases involving prosecutor Pinangki or other prosecutors and officials, they have to proceed transparently and the government must not lie, hiding things in situations like this,” he said.