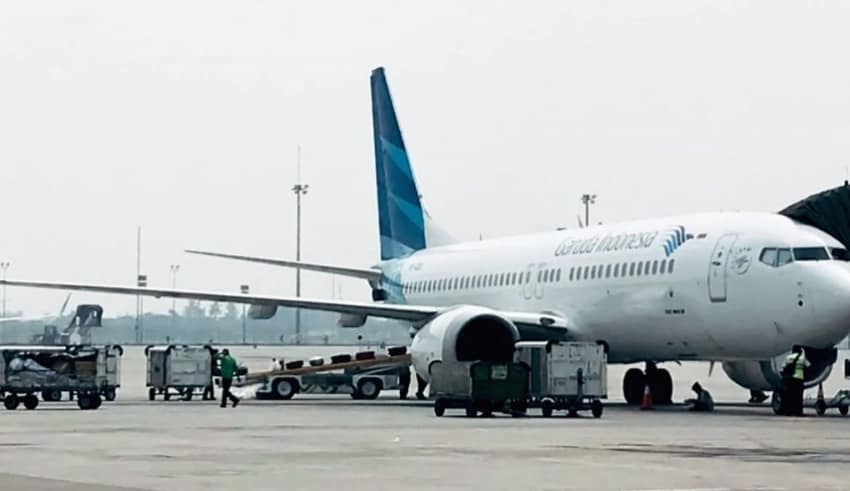 Flag carrier Garuda Indonesia has grounded the majority of its fleet as part of the large-scale social restriction (PSBB) to contain the Covid-19 pandemic.

And, the number of air travels is expected to continue to drop in May 2020, especially right through the normally busy Idul Fitri holiday at the end of the month.

“We will have salary cuts and payment delays at all levels. Annual incentives and benefits will suffer cuts as well,” Garuda president director Irfan Setiaputra said.

Garuda president director Irfan Setiaputra, in In a teleconference with the House of Representatives’ Commission VI on Wednesday said Garuda and its staff have agreed on salary postponement and cuts for at least 25,000 workers in order to reduce losses.

“We will have salary cuts and payment delays at all levels. Annual incentives and benefits will suffer cuts as well,” he said.

However, he went on, the management will still pay holiday bonuses [THR] even though the State-Owned Enterprises Minister has ordered a stop to bonus payments for directors and commissioners.

What is the most service that gets affected to the airline?

According to Irfan, the decision by Saudi Arabia to suspend umrah, the minor pilgrimage to Mecca, has hurt the airline the most.

Garuda even had to send empty planes to Mecca to pick up Indonesian Muslims who had already completed their umrah.

Garuda continues to fly to the countries like Netherlands, Japan, South Korea and Australia because the homecoming or ‘mudik’ ban during Ramadan and Eidul Fitr does not apply on international flights.

Deduction of allowance has been impacted to the civil servants’ (ASN) in Jakarta. The Jakarta Employment Agency Head Chaidir confirmed the government will deduct 50 percent of earnings improvement allowance or TPP in a bid to adjust the capability of regional budgets (APBD) during the coronavirus pandemic.

Chaidir reiterated that Indonesia’s economic contraction has reached 53 percent and affected all sectors, forcing the government to reduce regional performance allowance (TKD) and TPP. The cut of ASN’s TPP will be valid for all ranks.

By seeing Indonesia’s economic contraction has reached 53 percent and affected all sectors, forcing the government to reduce regional performance allowance (TKD) and TPP, Chaidir said. The cut of ASN’s TPP will be valid for all ranks.

Later, officials at the echelon II level who normally earn TPP of up to Rp58 million per month will obtain half of the figure starting May 2020.

The adjustment is mandated by the joint ministerial decree of the Finance Ministry, in which calling on regional administrations to adjust the TKD. Additionally, the accetance of ASN to such adjustment following prevailing laws that stipulated if the country faces natural disasters or outbreaks.

As for Eid holiday allowance or THR, according to him, Jakarta will follow the central government’s policy. For civil servants at the echelon III level will receive their THR, because it is diferent from TPP or TKD, according to him.

Meanwhile, more Indonesians have lost their jobs during the coronavirus crisis. And, the Government has provided flagship unemployment benefits program, the pre-employment card, which is it counted 8.6 million members were registered by Tuesday.

The program doubles as a government safety net for people who have lost their employment during the pandemic, and it already transferred Rp 3.55 million ($224) as incentives to each of the second-wave participants on Tuesday.

The participants must sign up for one or more of the 2,000 online training courses available for the program to earn their incentives.

[…] Although the province of East Nusa Tenggara (NTT) has red zone status for COVID-19, but the provincial government has decided to continue the operation of domestic flights. […]

[…] airline, Garuda Indonesia admitted the flag-carrier transported passengers in recent flights under an exemption permit amidst […]