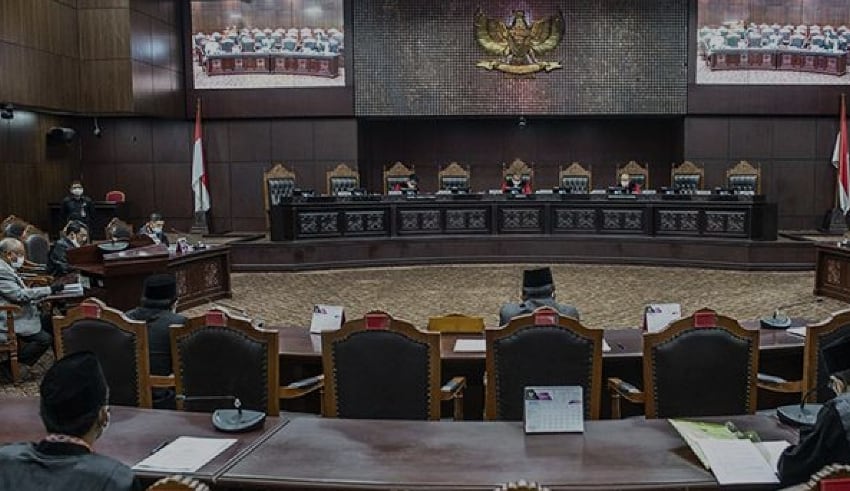 The Constitutional Court (MK) held a further session of the Government Regulation in Lieu of Law of Corona (Perppu Corona) filed by Amien Rais, Din Syamsuddin, and Sri Edi Swasono. The session was scheduled to hear the statements of the People’s Representative Council (DPR) and the President.

Present at the hearing were Minister of Law and Human Rights Yasonna Laoly, Finance Minister Sri Mulyani, and Attorney General ST Burhanuddin as the presidential representative.

“On Tuesday, May 12, the House of Representatives gave approval for the stipulation of the Perppu to become Law. And the government has ratified the DPR’s approval through Law No. 2 of 2020, “Sri Mulyadi said

“On Tuesday, May 12, the House of Representatives gave approval for the stipulation of the Perppu to become Law. And the government has ratified the DPR’s approval through Law No. 2 of 2020, “Sri Mulyadi said in the Court’s courtroom, Jakarta, Wednesday, May 20.

Chief Justice of the Constitutional Court Anwar Usman then invited Amien Rais who was represented by legal counsel to respond, whether to continue the lawsuit or not. Because the object of the lawsuit namely Perppu Number 1/2020 has been ratified into law.

Amien Rais’ attorney, Ahmad Yani, submitted the continuation of his lawsuit to the judges of the Constitutional Court.

Ahmad Yani stated the possibility that his party would file a new lawsuit against the Corona Act if the Constitutional Court decided not to continue their request.

“Because the object becomes law, we leave it to the assembly to decide this. Second, because it has become a law, maybe we will file a new lawsuit,” he said.

In fact, he said, Article 22 paragraph (2) of the 1945 Constitution stated that the ratification of the Perppu into Law was carried out in the next trial period. So that the legalization of the Perppu Corona should become law made during the DPR session IV.

But if it is continued, Ahmad Yani said that he has prepared a number of experts to strengthen his lawsuit argument, namely experts from the clusters of state, economic, criminal, and Islamic law.

After hearing the government’s statement and the petitioner’s response, Anwar stated that the Constitutional Court panel of judges would hold a judicial deliberation meeting (RPH). In the RPH, it will be decided whether or not the lawsuit against the Corona Perppu filed by Amien Rais et al.

Meanwhile, The Indonesian Community for Dialysis Patients (KPCDI) is again suing the increase in the contribution of the Health Social Security Organizing Agency (BPJS Healthcare) raised by the government. KPCDI filed a lawsuit for judicial review of Presidential Regulation Number 64 Year 2020 to the Supreme Court on Wednesday, May 20.

“After we made a contemplation to find enlightenment for the interests of KPCDI in particular and the people of Indonesia in general, we finally had to re-register the material test rights for Presidential Regulation (Perpres) Number 64 of 2020 to the Supreme Court on Wednesday, May 20, 2020,” said KPCDI’s attorney, Rusdianto Matulatuwa, in the information received on Wednesday, May 20.

He considered that the government’s policy to increase BPJS Health contributions again did not have empathy for the people. The reason is, the increase was made in the condition of the Covid-19 pandemic which was extremely difficult for the community.

According to him, the policy to increase fees is an injustice and is not in accordance with what is interpreted in the National Social Security System (SJSN) Act or the BPJS Law.

In addition, the KPCDI will also test whether the increase in BPJS Healthcare contributions is in accordance with the level of the community’s economy amid the coronavirus pandemic. Moreover, there is currently a massive wave of layoffs that is driving up unemployment rates and people’s purchasing power down.

Rusdianto also reminded the government that should listen to the Supreme Court’s opinion that the root of the problem that was overlooked was the management or governance of BPJS as a whole. The reason, BPJS has repeatedly injected funds, but it is still a deficit. Rusdianto asserted the material test suit for the increase in contribution was carried out to assess whether this increase was in line with BPJS Health’s responsibility in providing services to all participants.