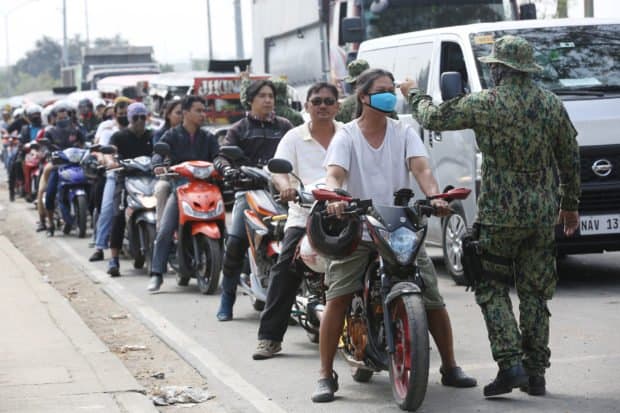 It’s like across between Holy Week and a transport attack said a coffee shop employee at BF Homes Parañaque, describing the unusual silence that came down on the city as a police force, backed by the military and the coast guard, closed Sunday’s access to Metro Manila, enforcing a month-long quarantine that officials hope would curb the the cases of coronavirus in the Philippines.

Normally the coffee shop is crowded on Sunday mornings but only one table was occupied this Sunday, by a couple and their young daughter who kept looking out on the empty street.

The family was expected to go to Mass but was shocked to hear that up to next Saturday Bishop Jesse Mercado of Parañaque had cancelled “all public liturgical services” in the city’s churches and in Las Piñas and Muntinlupa.

There were also no church services, shopping and entertainment in suburban Quezon City and 16 other towns and cities in the vast metropolis— host to 12 million people who had been told to stay host except for work and urgent errands as the government locked down the National Capital Area in one of the most drastic containment measures against the latest coronavirus in Southeast Asia.

The quarantine means the suspension of domestic journeys to and from Metro Manila by land, air and sea.

Wide gatherings such as worship services, movies and cockfighting are banned and most government work in departmental executive offices is suspended until April 14.

President Duterte announced what he billed a “general community quarantine” of the entire metropolis on Thursday after a sudden spike in coronavirus cases and deaths.

At least 41 other cities and provinces sealed off their borders on Sunday to keep the coronavirus out. Among the provinces were Cebu, Oriental Mindoro and Bohol. The cities included Iloilo, Ormoc, Davao and Zamboanga. (See story in Regions, Page A8.)

Officials released guidance Saturday after uncertainty over the sudden changes set off panic buying in supermarkets and caused many provincial residents to flood out of the metropolis, fearing they would be stuck in the capital.