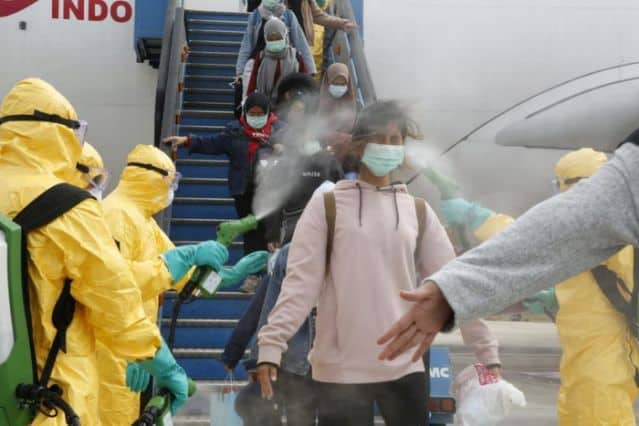 On Sunday (2/2/2020) morning, Indonesians that had been evacuated from Wuhan and other cities in China arrived at Hang Nadim Airport in Batam, Riau Islands. Then they were immediately directed to passenger planes operated by the Indonesian Air Force to be airlifted to Natuna Island for quarantine.
However, some residents protested to visitors on their return home who have been in China, to be in quarantine for 14 days over, concern about coronavirus.
As for now, there have not been any confirmed cases of coronavirus in Indonesia. But neighboring country, Philippines on Sunday reported the first death from the virus outside China.
For temporary, Indonesia will also stop flights to and from mainland China starting Wednesday. Foreign Minister Retno Marsudi said on news conference, it will immediately bar visitors who have been in China, for 14 days from entering or transiting. She also advised not to travel to China during the coronavirus epidemic.
One of Indonesia airlines, Lion Air Group has already stopped its flights to China.
Meanwhile, in China, coronavirus has killed 304 people and infected more than 14,000. This virus has also spread to more than 20 other countries and regions as reported.

Earlier on Sunday, Indonesia government flew 243 Indonesians from China’s Hubei province, the epicenter of the virus, and placed them under quarantine at a military base on Natuna Besar island. This place is located in northwest of Borneo and sparsely populated
Furthermore, Marsudi said those people that involved in the evacuation will have to stay there for 1 days under observation. The total of them is 285 people, including flight crew and the team.
They were reportly healthy, but their presence on the island alarmed some residents. Around 200 people set tires ablaze during a protest rally on Sunday.
Regional police spokesman Harry Goldenhard said by telephone.
What the government is doing has been weighed and planned carefully. The location of the observatory is far from their homes, some 6 km away,” Harry said. He also said if the virus will not spread.