The Asian Affairs > Thailand > Ongoing Campaign against Chiang Mai on Charges of Sedition, Lead Activist Arnon to Not be Silent 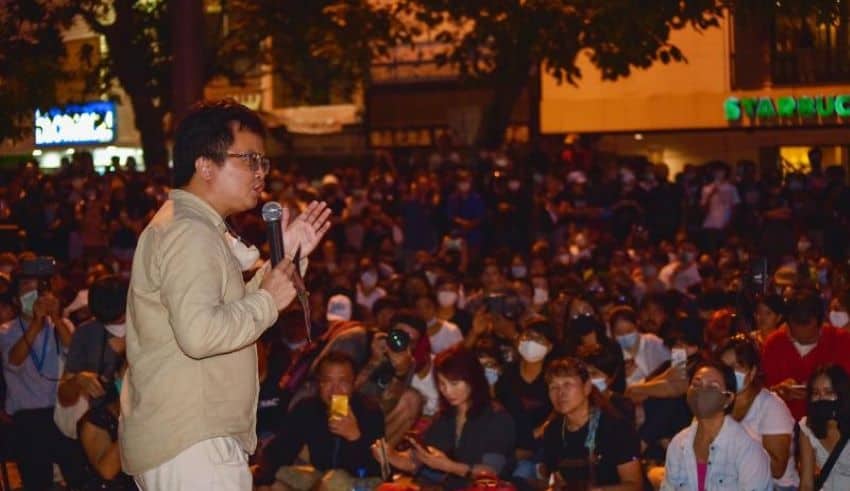 Prominent activist Arnon Nampa shot at the government to "threaten" the pro-democracy movement on a Sunday protest.
(C) Bangkok Post

Prominent activist Arnon Nampa shot at the government to “threaten” the pro-democracy movement on a Sunday protest — a day after his bail release on charges of sedition for his role in a recent rally.

The arrests also came four days after Mr Arnon had been debating the role of the monarchy in Thailand at a revolutionary rally. Released on bail on condition that the alleged crimes will not be repeated, Mr Arnon traveled to Chiang Mai on Sunday to speak at a rally.

Analysts say former army chief Prayut and his faction, the 2017 military-scripted charter tipped the scales of last year’s election. Protesters regard his administration as a legacy of a royalist junta dictatorship — filled with ex-generals and powerful establishment allies. His speech ignored the debate about changing the draconian royal defamation laws of the kingdom, which shield the monarchy from criticism.

The legislation holds a penalty of up to 15 years per offense making it nearly impossible to scrutinize the monarchy openly. Under the law no charges have been filed against the demonstrators so far. Another anti-government protest in the province of Phitsanulok was cancelled on Sunday, according to its Facebook organizer, who announced it under the hashtag “stop menacing people.”

Protesters say their nascent pro-democracy movement was organically organized, with young leaders taking the flashmobs to social media. The coronavirus pandemic has brought Thailand’s economy into freefall, sharpening young Thais’ discontent as the downturn revealed the equality of a perceived society in favor of the pro-military elite establishment.