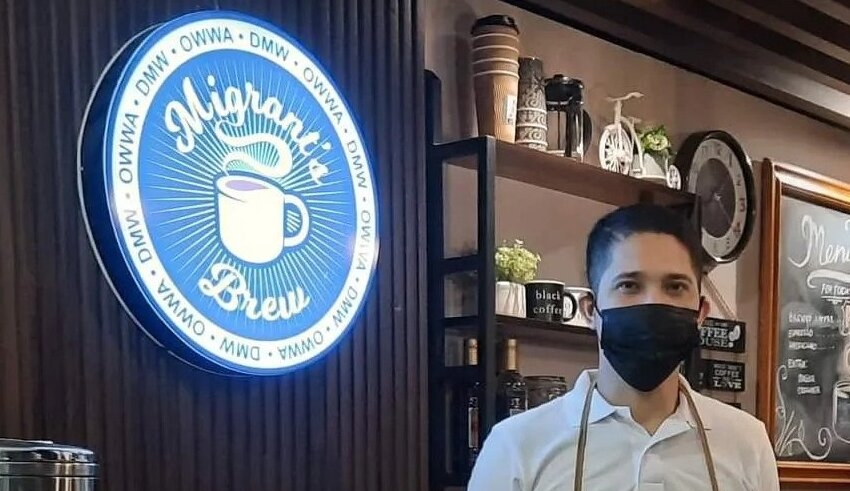 Monday, November 14 saw the opening of Migrant’s Brew, a small café in the OWWA lobby, by former television celebrity and current OWWA administrator Arnell Ignacio. Ignacio could not hold back his tears as he launched the café.

“Ayokong bibigyan lang sila ng monoblock, papaupuin, at bibigyan ng help. I want them to feel like VIPs at OWWA – free coffee of their choice,” Ignacio remarked at the café’s opening ceremony on Monday.

(I do not want to simply give them a single-piece chair, force them to sit down, and provide assistance. I want them to feel like VIPs at OWWA (free coffee of their choosing).

Filipinos conducting business in the OWWA may obtain a ticket for free coffee from the security guards stationed outside the lobby. The customer must then offer the coupon to the employees at Migrant’s Brew, register, and select their coffee.

The café was visited by Rappler on November 18th. There were brewed coffee, espresso, and Americano on the menu.

Ignacio was moved by the inauguration of Migrant’s Brew as he recalled the criticism he received for undertaking “this type of initiative.” The OWWA previously stated that the establishment of the café was condemned for “lacking sensitivity to the requirements of migrant workers.”

But Ignacio was determined to launch the project in order to make OFWs feel “special.”

A Call To Open Voting Centers for BPO Employees

“It makes me want to jump with pleasure because previously, when I was new to OWWA, I could only witness OFWs frowning and holding torn-up envelopes. When you care for people, you do not merely provide them with what they request. In an interview with Rappler published on Friday,” Ignacio stated, “You give them something extra…. I care about how they feel.”

During the ribbon-cutting event, the OWWA director expressed his desire to launch such programs in more OWWA offices across the country and in Philippine diplomatic missions abroad.

Ignacio joined OWWA for the first time in 2018, but resigned in February 2019 citing “personal reasons.”

In September 2021, he was reappointed OWWA’s deputy administrator. In August 2022, President Ferdinand Marcos Jr. replaced Hans Cacdac, the current undersecretary of the Department of Migrant Workers, with Ignacio (DMW).

The OWWA is an agency affiliated with the DMW. Ignacio’s emphasis on warmer treatment for OFWs is consistent with one of the first statements made by Migrant Workers Secretary Susan “Toots” Ople, who stated that “grumpy people are not tolerated” in the DMW.