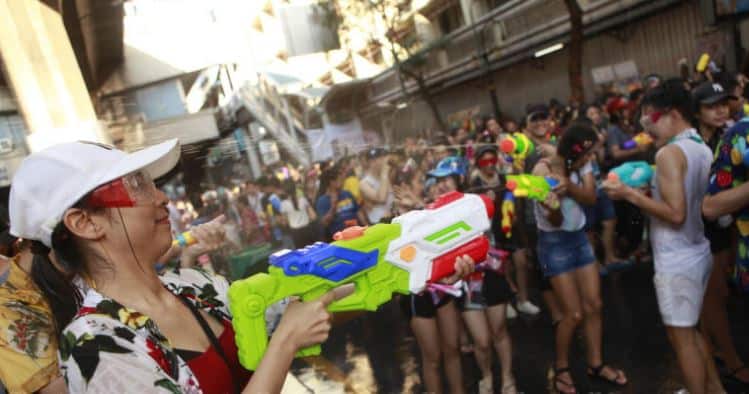 There will be no water splashing during Songkran — at least in Khon Kaen, Pattaya and Bang Saen — as the coronavirus outbreak has forced organisers to scrap activities that could expose more people to the bug that is bringing the world to a standstill.

Khon Kaen Municipality on Thursday announced the cancellation of the Khon Kaen Songkran Festival, leaving only religious ceremonies to be held during the traditional Thai New Year period this year, as organisers were concerned about the virus. Events were scheduled to run from April 8-15 in the province, which typically boasts the most popular Songkran celebrations in the Northeast. The festival on Khao Niew Road rivals the celebrations seen in the tourist hub of Khao San Road in Bangkok.

Chamber chairman Kamolpong Sanguankrakul commended what he called a bold decision, saying the early announcement would give businesses time to adjust their plans. Mr Kamolpong said business operators in Khon Kaen were already suffering from the plunge of visitors, with hotel occupancy rates down by half for a second straight month in February. Seminars, meetings and other activities have been called off until the end of next month, he added. The trade body is now turning to local residents, encouraging them to come out of their homes to spend and bolster the provincial ecomony, he added.

The Songkran festival in Khon Kaen is not the only tourism casualty so far. Koh Phangan in Surat Thani has suspended its full-moon party for the same reason. The beach party will return only when things get back to normal, organisers on the southern island say. Pattaya City, meanwhile, has cancelled the traditional Songkran festival called wan lai scheduled for April 18-19. The festival that brings people into the streets for water splashing, as well as religious ceremonies, is normally held after the Songkran holidays in the rest of the country.

The prospects for Songkran activities in Bangkok, including the Khao San water-splashing days, now appear increasingly uncertain. The Bangkok Metropolitan Administration and Tourism Authority of Thailand will soon make a decision on whether they should go ahead.