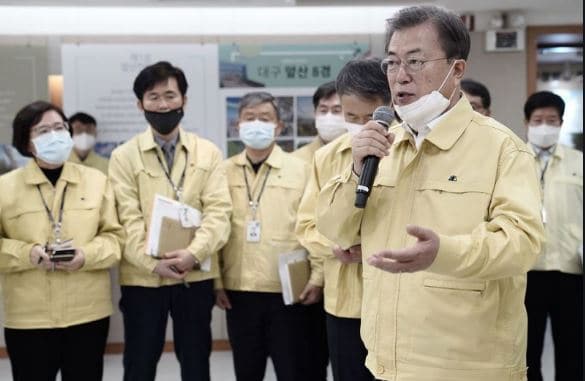 South Korea threatened retaliation against Japan for what it called an “irrational and excessive” request for its citizens to voluntarily quarantine themselves, as Tokyo’s outbreak-control measures renewed tensions between the neighbours.

The South Korean Ministry of Foreign Affairs expressed “deep regret” over Japan’s latest travel restrictions in a statement Friday, saying they came “without prior or sufficient discussion with us, and we strongly urge these measures be immediately withdrawn”. The ministry hinted at deeper mistrust between the two sides, saying “we cannot help but be suspicious of a separate intention other than prevention of the virus”. South Korea’s presidential office said after a National Security Committee meeting Friday that it was considering “corresponding measures,” while the foreign ministry said it would summon the Japanese ambassador.

In Tokyo, Health Minister Katsunobu Kato told reporters the policy was a non-binding, voluntary request for quarantine, adding the government was asking visitors from South Korea and China to stay indoors at hotels and homes for two weeks. Japan’s own travel measures came after Mr Abe faced pressure over his coronavirus response, which was initially seen as muted in comparison to other countries. Mr Moon’s approval rating inched up to 44% from 42% a week ago, a Gallup Korea tracking survey showed Friday. Moon reversed a slide from last week when people saw his initial response as ineffective, and has won support as he has framed his response as part of a nationwide “war” to halt the virus.

Flights from China and South Korea will be restricted to Narita International Airport near Tokyo and Kansai International Airport in Osaka, while arrivals by ship will be halted, Abe said Thursday. Japan will suspend some visas already issued to Chinese and South Korean nationals, he added. Japanese Health Minister Katsunobu Kato said Friday that South Koreans and Chinese visitors would be asked to quarantine themselves at hotels and homes, and Kyodo News reported his ministry as saying that the quarantine was a request and non-binding.