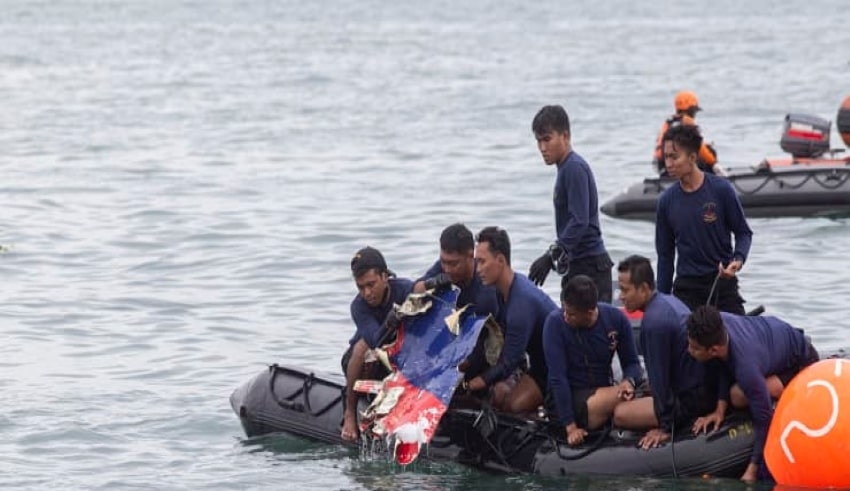 Indonesia has been involved in the scene of many air disasters. Looking back since an AirAsia jetliner carrying 162 individuals went down in the Java Sea in December 2014.
(C) cnbc.

Over the past decade, Indonesia has been involved in the scene of many air disasters. Looking back since an AirAsia jetliner carrying 162 individuals went down in the Java Sea in December 2014, the nation is try to focused on rescue efforts.

Less than four years later, in the aftermath of a Lion Air crash which claimed 189 lives, they now returned to the same waters to search for debris and corpses. Now  they are back after Sriwijaya Air Flight 182, with 62 people on board, crashed into the water. It’s heartbreaking that there are 10 children, including three babies who suffered the tragic crash.

Going back to what happened, The SJ182 plunged close to 3,050m in 14 seconds shortly after take-off from Jakarta. Indonesia’s National Aviation Safety Committee shared that when the plane reached the sea at high altitude, the engines of the Boeing 737-500 were working, suggesting that the aircraft was in one piece upon impact. It remains a mystery what caused the violent plunge.

In view of this, there’s also a familiar with the case, one theory authorities are looking at is the pilots losing power because a malfunctioning throttle produced more thrust in one of the engines. In fact, on the previous flights, the system had difficulties.

Along with the the search in its second week, expectations are dwindling that the voice recorder of the cockpit will ever be identified, a critical jigsaw element in figuring out what happened. The case of the so-called black box was recovered last Friday by Divers, but the memory chip that documents contact between pilots and ambient sound in the cockpit had broken loose.

Consequently, the flight data recorder was retrieved which would offer hints as to whether this was a Boeing plane problem, pilot mistake, a freak weather incident, or anything else altogether. But without the other black box, the inquiry is jammed. As the aircraft crashed into the sea, both locator beacons were dislodged, an impact so hard that it must have been like striking concrete, according to Queensland-based air-safety expert Geoffrey Dell.

The search time was prolonged by the Indonesian authorities, prolonging the stay of the divers on the command vessel off the coast to the north of Jakarta, but it is expected to end.

Morever, Mr. Wardoyo commands a squad of 15 trained civilian divers with diverse expertise, such as deep-sea exploration and cave diving. All of them is a police officer and a dive instructor. Specialist divers from the National Search and Rescue Service, or Basarnas, are assisted by a team of volunteers. He is not positive about the remainder of the voice recorder being restored.