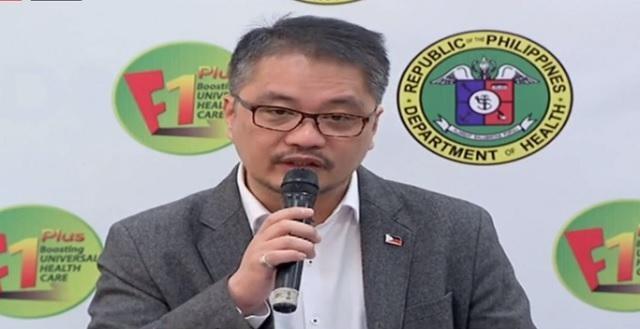 The patient was a Chinese female citizen who was 60 years old.

She arrived from Wuhan, China via Hong Kong in Cebu City last January 20, under-secretary of health Eric Domingo said in a press conference.

Then the patient went straight towards Bohol, he said.

She went to a private hospital in Bohol two days later, on Jan. 22, to be examined for fever and colds. She was admitted back then, Domingo said.

Both an Australian laboratory and the Research Institute for Tropical Medicine (RITM) tested her samples taken on January 24, and both tests showed that she was negative for nCov.

Subsequently, however, RITM tested a sample taken earlier on 23 January, and the result showed that she was positive for nCoV.

Domingo said the clinical explanation for the two different test results is that at the time the samples were taken the woman was towards the end of the illness.

The woman was discharged from the hospital after testing negative and she already took a flight with her happy partners to Shenzhen, China on January 31.

According to the DOH spokesperson, it was only on February 3 that the RITM told the DOH about the positive test result.

The Office of Quarantine and Epidemiology communicates with the airlines concerned, while the Central Visayas Health Development Center coordinates with the hotel where the patient stayed and the hospital where she was confined.

He added that contact tracing for the persons who may have been in contact with the third case while she was in the Philippines will be done.

Upon arrival at the airport on 20 January, the woman showed no symptoms and only consulted a private doctor on 22 January after experiencing fever and cold.

Those on the way back to China with whom she shared a flight no longer need to be tracked as she was already well when she flew out.

At 12 noon on Wednesday, the country reported 133 suspected cases of novel coronavirus infection—115 of which are hospital admitted while 16 others have already been discharged.

However, Domingo stressed that there is no case in the country for the transmission of nCoV from human to human.