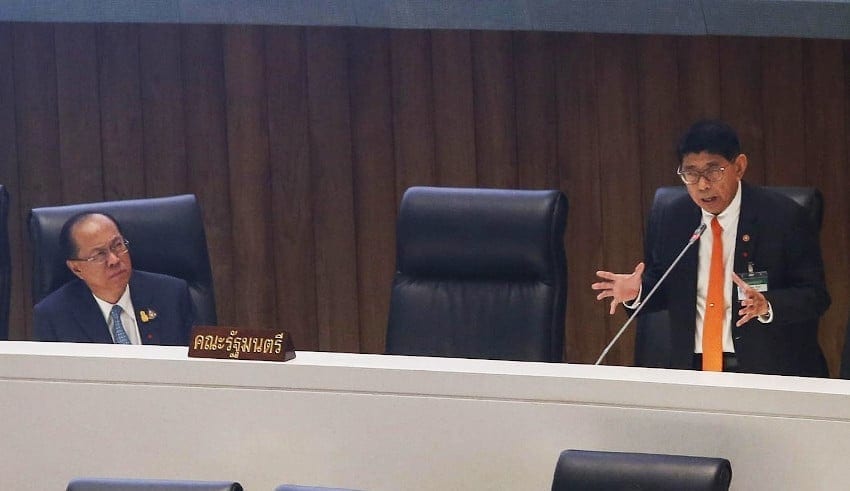 The government insists it never interfered with state agencies to favour Philip Morris (Thailand) Ltd (PMTL) by lobbying public prosecutors not to press a new charge against the company.

On the fourth day of the no-confidence debate, the opposition raised the dispute between Thai agencies and tobacco company Philip Morris to grill the government. Saranwuth Sarankate, a Pheu Thai Party MP for Uttaradit, accused Prime Minister Prayut Chan-o-cha, Deputy Prime Minister Wissanu Krea-ngam, and Foreign Minister Don Pramudwinai of being involved in efforts to help the company. He said Mr Wissanu called a meeting of agencies including the Office of the Attorney-General (OAG) and asked them to hold talks with the company to solve the dispute, which led to the amendment of Section 27 of the customs law and the reduction of the fine slapped on the company in a tax evasion case.

Mr Wissanu denied the allegations, saying the meeting in June 2015 was called because Gen Prayut was about to attend the UN General Assembly in the US and Asean Summit. The Office of the Prime Minister needed to prepare information to respond to possible questions about a dispute between Thailand and the Philippines in the World Trade Organisation over the Philip Morris price declaration scandal in which Thailand had lost the case three times.

According to the OAG, PMTL set the price of L&M cigarettes imported from the Philippines at 5.88 baht, while other importers declared that brand of cigarettes at 16.81 baht per packet. The firm also declared the cost, insurance and freight (CIF) rate on Marlboro from the Philippines at 7.76 baht per packet, far lower than the 27.46 baht reported by other importers. The OAG said such undervaluing of imports meant the company managed to avoid paying over 20 billion baht in taxes. The offence risks a fine worth four times the amount, or about 80 billion baht, the OAG said.

Meanwhile, the House was thrown into chaos after the opposition refused to wrap up its debate after its request for more debate time was denied by Deputy House Speaker Supachai Phosu. The House will vote on the no-confidence motion on Friday. Opposition MPs in the chamber shouted: “The government silenced the opposition!” to which Mr Supachai replied the opposition had already been given four days to censure the government.