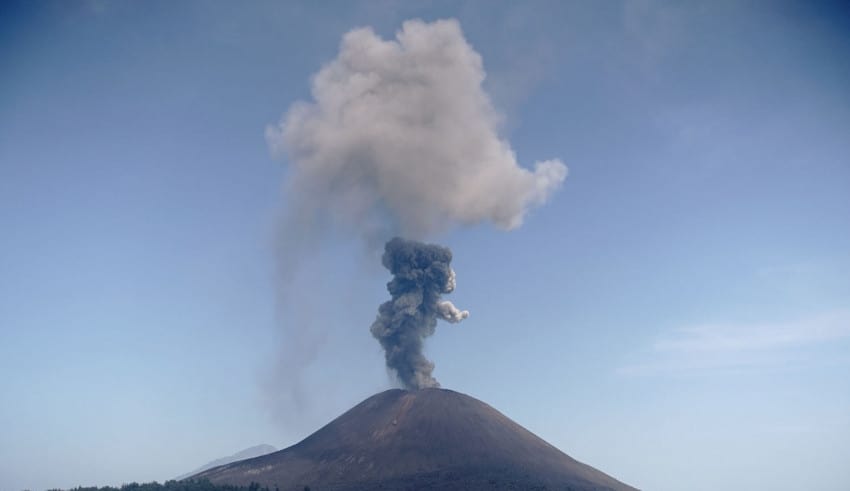 Mount Merapi, located at the border of Central Java Province and Yogyakarta, erupted on Friday, emitting a cloud of ash column up to 3,000 meters from the volcano’s peak.

Merapi erupted at 9:10 a.m. local time. Duration of the eruption was 103 seconds and an amplitude of 75 millimeters (mm), the Yogyakarta Geological Disaster Investigation and Technology Development Center (BPPTKG) stated on its official Twitter account on Friday.

BPPTKG has asked nearby residents to stay calm. The most recent eruption is the sixth Merapi eruption in the past two weeks, since March 27, 2020. Even though, the volcano’s activity is still measured at alert Level II (Waspada).

Advice also has been announced to people to not conduct activities within a three-kilometer radius from the summit of Mount Merapi.

“The danger zone is within a radius of 3 kilometers from the crater of the mountain. Should ash rains occur, the community needs to anticipate disruptions (to their activity) due to volcanic ash,” said Chief of the Yogyakarta BPPTKG, Hanik Humaida.

Before this one, Merapi erupted on Thursday, April 2, 2020, at 15:10. Data that was recorded on a seismogram, eruptions had amplitude of 78 mm and with duration 345 seconds; the height of the ash and dust column were recorded to reach 3,000 meters from the crater.

Mount Merapi has had a series of eruptions since first recorded on Friday morning, March 27, 2020, which eruption ejected volcanic materials as high as 5 kilometers. Since then, there have been at least six eruptions to this day.

Meanwhile, in the evening, Anak Krakatau (Child of Krakatau) volcano in Lampung erupted on Friday, spewing out a 200-meter-high column of ash and smoke.

The Center for Volcanology and Geological Disaster Mitigation’s (PVMBG) magma volcanic activity report said that the first eruption lasted one minute and 12 seconds starting at 9:58 p.m., when it spewed out ash and smoke 200 meters high.

It did not stop there, the volcanology center reported a second eruption at 10:35 p.m. that lasted for 38 minutes and 4 seconds, spewing out a 500-meter-high column of ash that blew to the north.

There were reactions from some internet users in Greater Jakarta, that saying they had heard a loud rumble before reports of eruptions and assumed that they were hearing the sound of Anak Krakatau after being informed about the volcano,

However, The chief of geology at the Energy and Mineral Resource Ministry (ESDM), Rudy Suhendar, asserted that the explosive sound heard by people in several parts of city such as Jakarta and Bogor, was not originated from the eruption of Mount Anak Krakatau (Anak Krakatoa) in Sunda Strait, Lampung Province.

“There is no explosive sound heard at Banten monitoring post since the first eruption until now. So, the eruption can’t be linked to the explosive sound,” Rudy said, as reported by the Volcanology and Geological Disaster Mitigation Agency (PVMBG) on its official Instagram account, Saturday, April 11.

Military and police officers are on standby with village and subdistrict officials over the possible evacuation of residents.

The last major eruption took place last December, which spewed out a 200-meter-high column of ash. A year earlier, an eruption triggered a landslide. Then this led to a tsunami that killed at least 430 people.

Following Friday’s eruptions, residents of the Kalianda coastline in South Lampung also evacuated. Because, the erruption bringing up fear that a tsunami might occur again.

Back to recorded history, in 1883, Krakatau volcano erupted in one of the biggest blasts. The erruption killed more than 36,000 people in a series of tsunamis and lowered the global surface temperature by 1 degree Celsius with its ash. Anak Krakatau is the island that emerged from the area in 1927 and has been growing ever since.