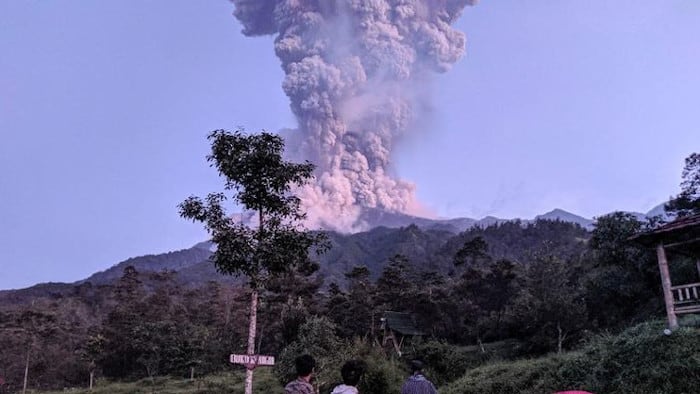 Mount Merapi erupted again on Tuesday (3/3/2020) at 05.22 WIB with column heights reaching 6,000 meters. Residents around who carry out activities are still asked to be vigilant and keep a radius of 3 kilometers from the summit of Mount Merapi.

Based on Yogyakarta BPPTKG, the status of Mount Merapi is still at level II (Beware) of the potential for bursts of hot clouds and lava dome collapse and explosive eruptions.

Bursts of Merapi hot clouds can be seen clearly from various areas of the foot of the mountain, such as in the Village of Klakah and the Village of Jrakah, Selataman Selo, Boyolali.

According to the Head of Klakah Village, Marwoto said that his office had headed to Sumber Hamlet, which was the highest in Klakah Village, to condition local residents.

Residents remain vigilant, despite carrying out activities as usual, such as students going to school to residents who work and work in the fields.

“This Klakah source hamlet, the topmost settlement or a distance of about 3.4 kilometers from the peak of Merapi is still under safe control and there is no ash rain,” said Marwoto.

Whereas the statement from the Head of Jrakah Village, Selo Subdistrict, Boyolali, Tumar, thick puffs of smoke from Merapi this morning, was seen interspersed with lightning flashes.

The thin ash rain was actually felt by residents in Boyolali City and the northern side of Merapi, namely Musuk District. According to one resident, the thin ash rain just disappeared because it was accompanied by drizzling so the residents did not feel too much.

On the other hand, the Head of Emergency and Logistics Division of BPBD Sleman, Makwan, said that the TRC BPBD Sleman pantih in the Sleman regency is still zero due to ash rain.

“At the moment the people on the slopes of Mount Merapi Sleman continue to have their normal activities,” Makwan said.