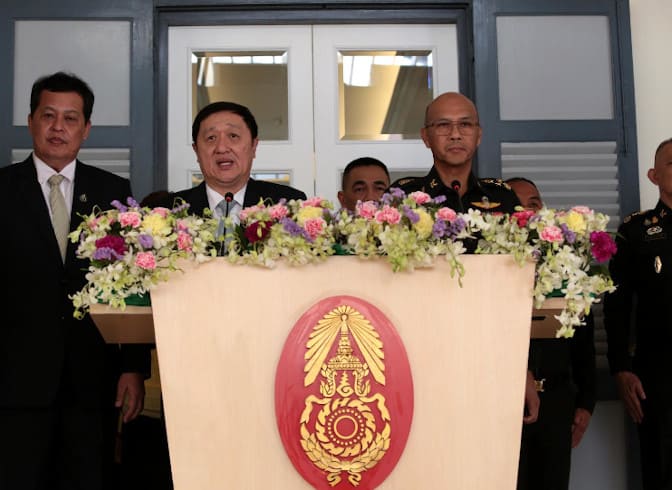 The army has struck a deal with the Finance Ministry’s Treasury Department on the management of its commercial welfare projects and its commercial use of state land to ensure transparency and regulation compliance.

The memorandum of understanding (MoU) signed on Monday will pave the way for the transfer of state land and commercial businesses to the Finance Ministry and allow most of their revenue to go into state coffers. Among the assets under the MoU were more than 100 petrol stations, retail shops, flea markets, boxing stadiums, golf courses, horse racing tracks and hotels — located on army land leased to it by the Treasury Department.

Speaking at a press conference after the signing, army chief-of-staff Gen Teerawat Boonyawat said the MoU paves the way for the discussions about how these commercial entities will be managed going forward. “The army is aware the land is state-owned and any transactions must be in line with regulations,” he said.

Gen Teerawat said its management of such commercial welfare projects is not unusual, citing the US army which has 160 golf courses. According to Gen Teerawat, a portion of the revenue from these welfare projects goes into the army’s welfare programme and which includes education subsidies and welfare benefits for low-ranking officers.

Finance permanent secretary Prasong Poontanate said under the MoU the army would hand over land used for commercial welfare projects back to the Treasury Department for commercial development with some of the revenue going into the state coffers. He said the revenue-sharing would be in line with the Treasury Department’s regulations while noting that it would vary depending on the types of businesses and their locations. For example, the army would likely receive between 2.5%-5% for the petrol stations while for some businesses the rate could be 7.5%.

Gen Teerawat added the army’s commercial operations were divided into two main types: commercial welfare assets such as hotels and boxing rings where civilians make up 50% or more of customers which will come under the department; and other internal welfare operations such as the army club which will remain with and run by the army. He said initially 40 commercial welfare businesses would come under the programme. To see more about latest news from thailand, All News About Asian Politics.