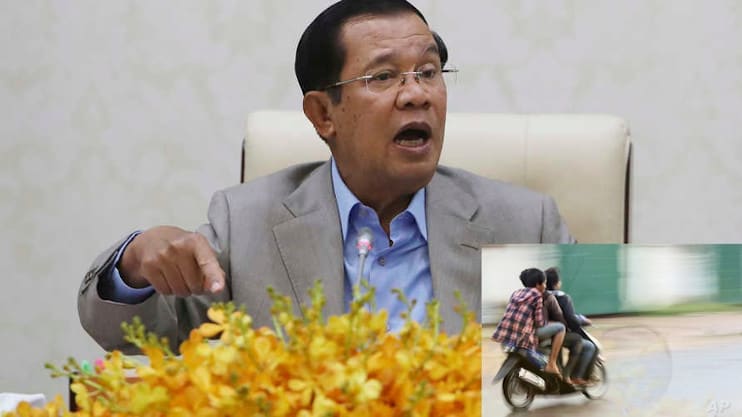 Speaking at the closing ceremony of the Interior Ministry’s annual conference on Thursday, Hun Sen suggested relevant authorities should consider revoking their licences and ban them from driving for a period of years. Hun Sen instructed officials to look into the possibility of doing this, noting some drivers have disrespected the traffic laws because they are rich and are able to pay fines. “Do not allow them to continue to break the laws. We must punish them and ban them from driving. They can travel but they can’t drive the vehicle,” he said. “We are doing so not just to punish traffic lawbreakers but also to protect their lives.”

Hun Sen also ordered traffic police to strictly enforce laws on motorists who ride motorbikes without a helmet in order to ensure that they understand the risk of driving without protection.

The National Road Safety Committee has reported  4,121 road accidents countrywide last year killed 1,981 people and injured 6,141. It said the number increased by 26 percent compared with 2018, the death toll rose by 12%, while the number of injuries went up by 29%. The report noted that an average of 5.4 people die every day on the roads. Most of the road accidents last year occurred in the capital, with 348 deaths, followed by Preah Sihanouk province with 149 and Kandal province with 143.

Institute for Road Safety deputy director Kong Ratanak said traffic police should conduct regular checks on motorists, adding a few did not attend driving school and had no knowledge of traffic rules. “If we look into the death toll from traffic accidents, most victims were motorcyclists. I’m not fully convinced merely increasing the punishment for offences will help,” he said on Thursday. Ratanak urged ministries and institutions to also increase traffic law enforcement and vehicle inspections, especially for over-loaded trucks.