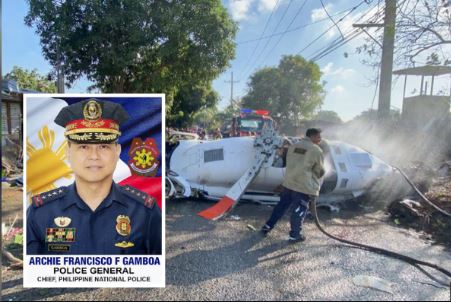 Gamboa, who was in Laguna to check the side of the Highway Patrol Group (HPG), rushed to the Westlake Medical Center in San Pedro Area.

Apart from Gamboa, the two-year-old Bell 429 chopper was:

Interviewed by Obina, Police Captain Edgar Miguel of the PNP HPG, who was among the first on the scene, said that Gamboa was conscious when he was taken out of the wreckage and asked about the other people in the chopper.

He added that some of them were unconscious and some had head injuries.

In a separate interview, Laguna Police Chief Police Lieutenant Colonel Serafin Petalio said the chopper had been entangled with a wire due to poor visibility caused by dust.

As a result of the collision, the chopper was torn in half.

Petalio said that Gamboa was hit on his right shoulder but was in stable condition.