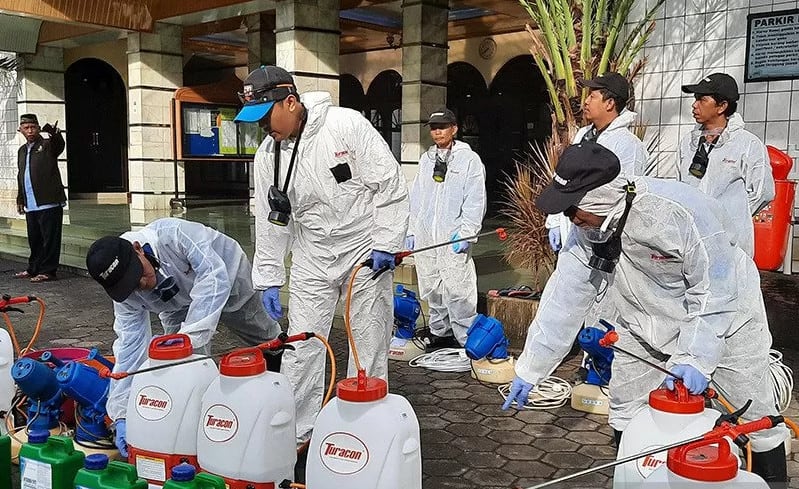 To prevent the spread of the coronavirus in Indonesia, the Indonesian Mosque Council (DMI) is carrying out a clean-up action, especially in the mosque environment.

Chairman of the Central Executive Board of DMI, M Jusuf Kalla explained, the spread of the virus most often occurs in crowded places, such as schools, malls, mosques, and mosques because it is always crowded with people. Therefore, DMI also sprayed disinfectants in mosques and prayer rooms.

“The task of DMI is to encourage the public to maintain cleanliness, especially in mosques. We use carbol and we use disinfectants for carpets,” Jusuf Kalla or JK said when reviewing the launch of the 10,000 Disinfentant Spray Movement in Jakarta to anticipate the spread of COVID-19 at Al Munawar Mosque, Pancoran, South Jakarta, Friday (3/13).

On the same occasion, JK said that DMI had prepared two million bottles of carbol for mosques throughout Indonesia in the context of the movement to clean mosques to prevent the spread of the corona virus (COVID-19). The prepared carbol will be distributed to mosques that need them especially those who cannot afford that.

For spraying disinfectants, said JK, DMI will form a team involving pest control companies to spray in mosques with an initial target of 10,000 mosques throughout Indonesia and DKI Jakarta.

“We formed dozens of spraying teams, today we have 10 mosques, every day a minimum of 20 mosques is reached. We will add to be 30 mosques per day in the future,” JK said.

JK added that spraying was a massive movement. “Later this movement will be added with cooperation with Indonesian National Board for Disaster Management (BNPB),” JK said.

He also said, in Indonesia there are 900 thousand mushala and 300 thousand mosques. The activities of distributing carbol and cleaning mosques only encourage DMI throughout Indonesia to keep the mosque clean. “Furthermore, people do it themselves because it is not expensive either. Roughing it up, pilgrims will be able to, (this activity) only shows the examples,” he concluded.