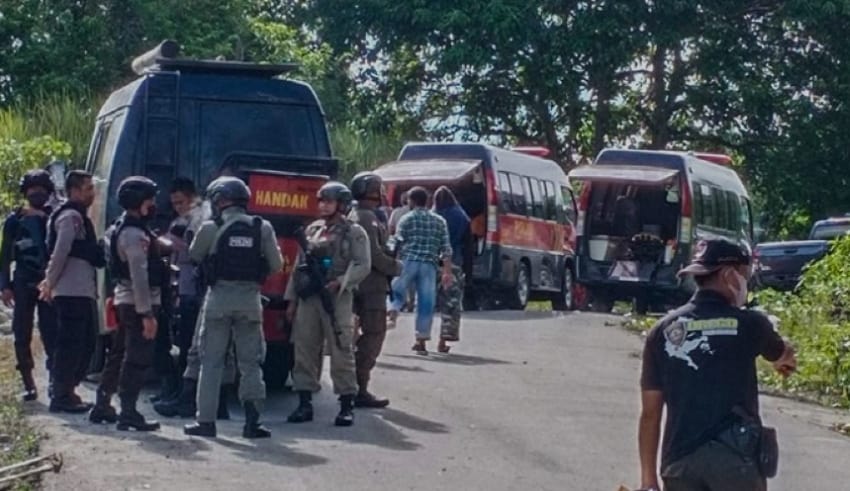 The Central Sulawesi Regional Police Chief, Insp. Gen. Syafril Nursal said that there was a firefight between the Combined Task Force of Tinombala and suspected civilian groups armed with the Eastern Indonesian Mujahidin (MIT) network in Poso District.

“Yesterday, Sunday (7/6) afternoon there was a firefight, in which a member of the Tinombala Operations Task Force team, whose whereabouts were shot by the MIT group,” Central Sulawesi Regional Police Chief Inspector General Syafril Nursal told reporters through a cellphone in his cellphone in Palu, as quoted by Antara on Monday, June 8.

Syafril said the shootout caused one member of the Tinombala Task Force member and one suspected Poso MIT network to suffer gunshot wounds.

“Yesterday, Sunday (7/6) afternoon there was a firefight, in which a member of the Tinombala Operations Task Force team, whose whereabouts were shot by the MIT group,” Central Sulawesi Regional Police Chief Inspector told reporters

A police officer who was part of the Alfa 9 Team in the Tinombala Task Force was injured in the chest due to being shot by armed civilian groups.

He said the shootout occurred when members of the Task Force Team patrolled from the mountains about KL100 meters, precisely at the location of the PDAM water pipe in Kawende Village. At that time the Task Force Team saw that there were two people to the left of the height.

Based on observations, Syafril, they were the initial DPO suspects KH alias I alias A. At the time of the incident they were wearing striped clothes.

On the other hand, the operation of the Tinombala Task Force was allegedly misdirected. Two peasants named Syarifuddin and Firman were killed when they were shot in the middle of the shelter in the Kawende Mountains region Kilometer 9, Poso District, Pesisir Utara, Poso Regency, Central Sulawesi on Tuesday, June 2.

Syarifuddin’s younger brother, Fardil said, they were taking shelter in his garden hut because of the raining after midday on June 2. Together with Syarifuddin and three of his friends, Anhar, Agus, and Muhajir, he had just harvested cacao and coffee. That day Agus brought Firman, his son, who was 17 years old.

Fardil protested why he was bombarded with fire, even though he had shouted that he was a farmer. A police officer, he said, said he did not hear the shout. They also claimed to have given warning shots. “None of us heard the warning shots,” Fardil said.

The Head of the Public Relations Division of the Indonesian National Police Headquarters Inspector General Argo Yuwono said his agency would follow up on the alleged wrong target in Poso.

The National Police promised to transparently convey the development of the investigation into the deaths of two farmers in Poso Pesisir Utara on June 2, 2020.