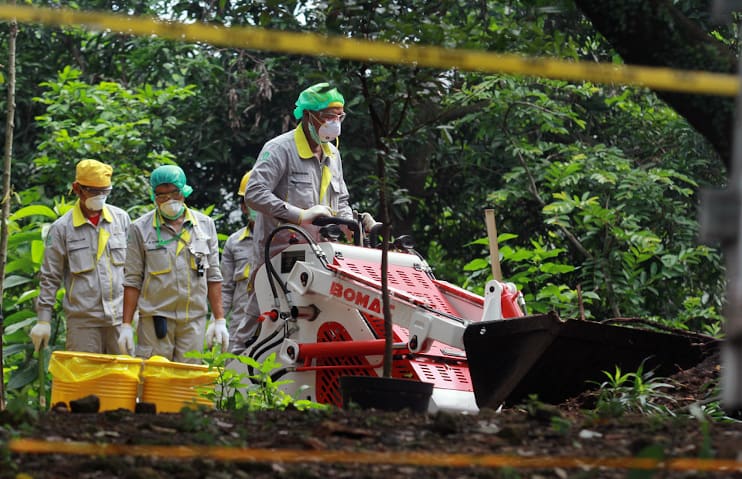 An area in a housing complex in Serpong, South Tangerang, Banten province has become a scene, because in that place detected radiation. Indonesian nuclear agencies then conducted decontamination operation over the weekend after got information of the radiation.

The place that operation was conducted at Batan Indah housing complex, and an official said that workers had removed 79 drums of radioactive soil. They also have done to cut trees and grass from an empty land in that area during the three days of cleanup until Sunday.

For information, the housing complex is named after the National Nuclear Energy Agency (Batan), which runs an office and a reactor in the same town.

A number of institutions were involved in the operation, namely officials from Batan, the Nuclear Energy Regulatory Agency (Bapeten) and the police.

Cesium-137, according to him, is used by various industries, including paper and steel. This can be serious risks to human health, including cancer and death, if there is exposure to high level radioactive cesium.

Investigation is underway to identify companies or individuals who used Cesium-137 and dumped the toxic waste at the housing complex. Individuals, as well as companies who hold license to use Cesium-137 are banned from storing or managing radioactive waste themselves. This waste must be sent to Batan’s Center for Radioactive Waste Technology in Serpong.

Nine residents of the neighborhood will undergo “whole body” examination to check the level of radioactive exposure at a Batan facility on Monday.

Abdul added the cleanup will continue until the radiation arrives at the level considered safe for humans.

“We can assure that the increasing radioactivity in the area has nothing to do with the [Batan] reactor,” Batan spokesman Heru Umbara said.

He informed that thing to make sure to public that radiaton not related to the housing complex that located about 45 kilometers from Batan’s Siwabessy Reactor.

Following the investigation, it found the radioactive contamination occurred underground. He also said any leak from the reactor would have impact in a wider area around it.