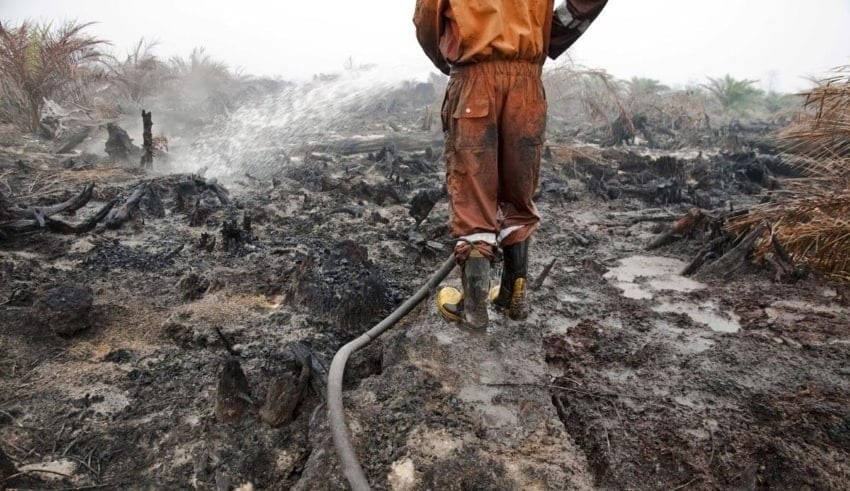 Setiono Ono stops his morning wildfire patrol at a small timber dam between a logged area and an oil palm plantation near the northeast coast of the island of Sumatra.
(C) postguam

Setiono Ono stops his morning wildfire patrol at a small timber dam between a logged area and an oil palm plantation near the northeast coast of the island of Sumatra. Water leaks the color of charcoal from the dam through a small canal cut to drain the peatland surrounding it.

The dam, built by the local community in Riau province’s Siak region, is one of thousands of canal barriers built in recent years to protect the peatlands of Indonesia.  According to the International Union for the Conservation of Nature (IUCN), peatlands account for around 3 percent of the world’s land surface, but peatlands store more carbon than all other terrestrial vegetation combined.

The IUCN says they release carbon into the atmosphere as peatlands burn, accounting for nearly 6 percent of the annual carbon dioxide emissions that drive global warming. More than a third of the world ‘s tropical peat is found in Indonesia, which plays a key role in protecting the carbon-rich ecosystem.

But in recent decades, its peatlands have been rapidly transformed into lucrative commercial plantations to meet growing foreign demand for palm oil, pulp and paper, 10 m deep in places. There was extra pressure to avoid large-scale fires this year in the midst of the coronavirus pandemic, as research related air pollution to increased susceptibility to the effects of COVID-19.

Despite this, the Ministry of Environment of Indonesia reduced its budget for firefighting by about half to bump up coronavirus support. In recent years, Indonesia has worked to minimize deforestation and wildfires, including by prohibiting peat production and setting up a new peatland rehabilitation agency. However, green groups point to inconsistencies in compliance and ambiguous zoning, while land on some plantations continues to burn.