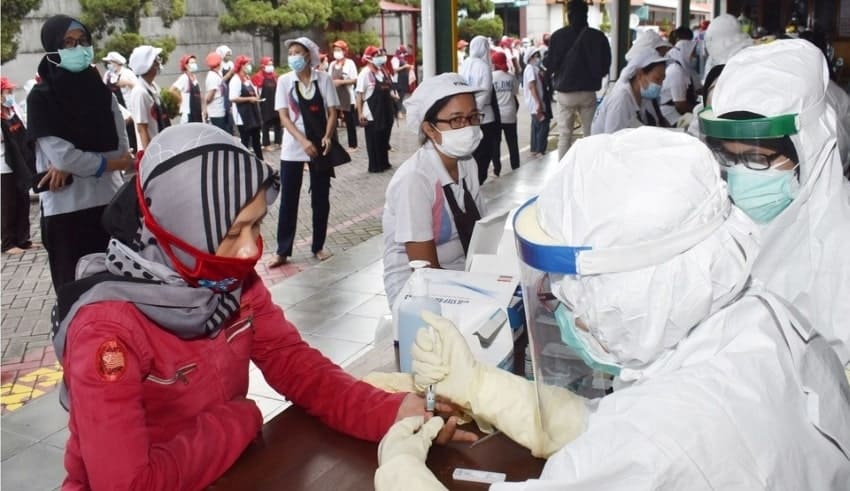 Indonesia saw a new high in its daily coronavirus cases on Friday with 3,003 more cases for a total of 165,887.
(C) Jakarta Globe

Indonesia saw a new high in its daily coronavirus cases on Friday with 3,003 more cases for a total of 165,887.

DKI Jakarta as one of the worst-affected provinces has a total of 37,082 cases. The capital city has more than cases in any other province, including 1,156 deaths. It has been averaging 560 cases per day since August 1.

In response to that, DKI Jakarta Governor Anies Baswedan has decided to extend the so-called transition period which allows businesses to reopen at half of their manpower for another 14 days due to surging cases in the capital.

It’s the first time in the country that new cases hit the 3,000 marks in a single day since President Joko “Jokowi” Widodo first announced the first COVID-19 patient on March 2. The number of COVID-19 patients has reached 165,887 people.

The new record came only a day after it reported the highest single-day rise of 2,719 cases. Accumulatively, the government has examined 2,169,498 COVID-19 specimens from 1,250,135 people. One person can have their specimen examined more than once.

The examination was carried out using the real-time polymerase chain reaction (PCR) method and the molecular rapid test (TCM).

National COVID-19 Task Force spokesperson Wiku Adisasmito said that three of Jakarta’s municipalities in Jakarta remained “red zones” in the past four weeks, and showed no signs of improvement.

Indonesia has added more than 57,500 cases since the beginning of the month, averaging more than 2,000 cases per day.

The death toll rose by 105, the second day in a row the country saw three-digit COVID-19 deaths, bringing the total death toll to 7,169

“The increasing number of cases is not too surprising because the island of Java, in particular, is approaching the peak, although it is not yet the peak, it is estimated that the peak will be from late September to early October,” said Dicky.

Agreed with Dicky, Epidemiologi Expert from the University of Indonesia (UI) Pandu Riono said, since the beginning of the COVID-19 outbreak in Indonesia, the condition has been critical. He regretted that the Indonesian government did not consider this condition as a critical situation.

Instead of using a large number of existing ministries and institutions, the government formed another special unit, namely the Task Force.

Despite the deteriorating situation, the task force has given the green light for city authorities to reopen movie theatres.

Wiku Adisasmito said that reopening movie theatres would contribute to public health “because people’s immunity can increase if they are happy.”