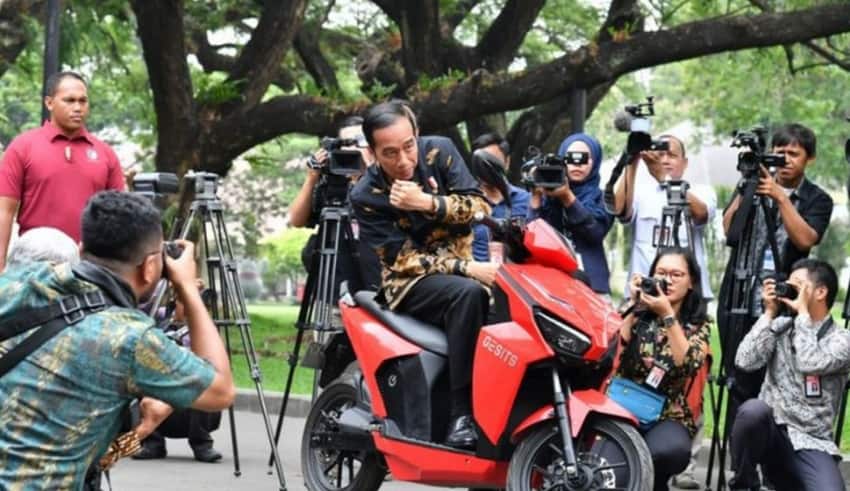 The case of an electric motorcycle auction signed by President Joko “Jokowi” Widodo caused a furor. The reason, the auction winner for Rp 2.5 billion apparently did not fulfill his obligation to pay for the motorbike.

The man was known to be named M Nuh who at the beginning was called a businessman from Jambi. Later M Nuh turned out to not be a businessman like the previous shadow. According to M Noah’s statement, he was called only a construction worker.

Subdistrict head of Pasar, Jambi City, Mursidah said, Thursday (5/21), the sub-district was exploring who is M Nuh that won the electric motorcycle signed by President Jokowi. He admitted there was a name M Nuh in his area. But he is not a businessman but only a construction worker.

Separately, Chairman of Neighbourhood (RT) 20, Ibrahim acknowledged that there is a citizen named M Nuh, but not as an entrepreneur. “There is a resident here, his background is impossible. Because he is a construction worker, there is indeed my resident,” he added.

Ibrahim explained, he knew of the news from viral news through WhatsApp, and then reporters and agencies came to him.

Earlier in the auction which took place at the People’s Consultative Assembly (MPR) charity concert with Agency for Pancasila Ideology Education (BPIP), the motorbike was auctioned to help the handling of Covid-19.

Bargaining for motorcycle prices took place via phone. The highest bid locked at the price of Rp 2,550 billion won by M Nuh. At that time his bid had been confirmed by the parties involved in the event. But lately it turns out the offer is only fake.

The police have examined M Noah. “We have examined the winners of the electric motor auction at a price of Rp2,550 billion,” Jambi Regional Police Chief Inspector General Firman Setyabudi said via WhatsApp message to a number of reporters in Jambi on Thursday.

According to the Regional Police Chief, M Nuh the winner of the electric motorbike auction was a resident of Kampung Manggis, Pasar District, Jambi City. The interview was only conducted at Pasar Polsek, Jambi City. There was no arrest or detention of him.

To the police, M Nuh claimed that he had not known if the event he attended was an auction. M Nuh thought he would get a prize instead.

“He, after being interviewed, did not understand the event that was followed was an auction. The person thought he would get a prize,” Firman said, Thursday.

The police stated that Muhammad Nuh, aka M Nuh, had asked for protection from the police for fear of being billed.

MPR Chairman Bambang Soesatyo or familiarly called Bamsoet who was involved in the event asked the police, especially the Jambi Regional Police to release those arrested in connection with the auction at the “Concert Sharing Charity with Bimbo” on Sunday, May 17.

That was said by Bamsoet related to the news which stated that the Jambi resident was allegedly named M Nuh the winner of the electric motorbike auction signed by President Jokowi for Rp2,550 billion, reportedly secured by the police from the Jambi Police.

Bamsoet said that his request was for the party arrested by the Jambi Police to be released because there were no parties harmed. “Nothing is ‘done’. Believe in good faith and good intentions,” he said.

The police stated that Noah was not prosecuted and was not arrested. “He has not been detained since the interview until now,” said Firman.

“Based on the information I received, even M Nuh, is part of residents who must get social assistance,” said Firman as quoted by detikcom, Thursday.

The ‘Gesits’ electric motorbike signed by President Jokowi was sold at Rp2,550 billion in a virtual fundraising charity concert on TVRI and a number of other television stations on Sunday (5/17).

This concert was held by MPR RI together with the BPIP and the National Disaster Management Agency (BNPB). MPR Chairman Bamsoet ended the offer at a price of Rp 2.550 billion. The winner of the bid is M Nuh, a Jambi resident.

Indonesian Chambers of Commerce & Industry (KADIN) Chairman Rosan Roeslani said the Gesits motorbike was special because it was a local production motorbike that Jokowi had driven.

After being hit by a prank, President Jokowi’s electric motor auction finally found a winner.

Earlier, the committee asked the KADIN Chairman Rosan Perkasa Roeslani for advice on the next steps. Rosan suggested that the committee contact the second-highest bidder at the auction.

The winner is Warren Haryputra Tanoesoedibjo, the son of a businessman and politician Hary Tanoesoedibjo. The organizer then asked Warren’s willingness to win the auction by equating bids of Rp 2.55 billion. And Warren is willing to get it with the same auction.

At the end of the event the total donation collected was IDR 4,003,357,815. It is planned that the auction results will also be donated to art workers affected by Covid-19.