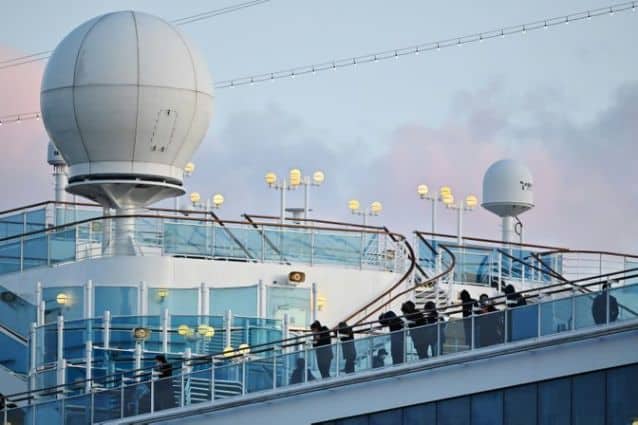 The Diamond Princess has proved a fertile breeding ground for the virus with at least 542 positive cases, and there is mounting criticism of Japan’s handling of quarantine arrangements as passengers ready to disperse into the wider world.

Relieved passengers began leaving a coronavirus-wracked cruise ship in Japan on Wednesday after testing negative for the disease that has now claimed more than 2,000 lives in China. The ship is the biggest cluster outside China, where new figures showed the death toll surging beyond 2,000 with more than 74,000 infected. Hundreds more cases have been reported in two dozen countries.

For some 500 passengers allowed to disembark after testing negative, a difficult 14-day quarantine period has come to an end after their dream cruise turned into a nightmare of fear and crushing boredom confined in many cases to small windowless cabins. “NEGATIVE! Me, son, husband, mom and dad! Thank you Lord for protecting us… So emotional now,” tweeted passenger Yardley Wong, who has been cooped up with her six-year-old son.

Those with no symptoms and a negative test received an official certificate saying they posed “no risk of infection of nCoV, as the said person has also presented no symptoms including fever at the time of infection.”

Disembarkation is expected to take around three days as more test results become available. Anyone who has had contact with an infected passenger will have to undergo 14 more days in quarantine. In addition, the crew will begin a new quarantine when the last passenger has disembarked. But people in Yokohama appeared supportive of the decision to allow the passengers out despite the virus fears. “I am sure those people on board must be really worried. I hope they can go back to their normal life soon,” said 51-year-old Isamu Habiro. To check more latest news from thailand