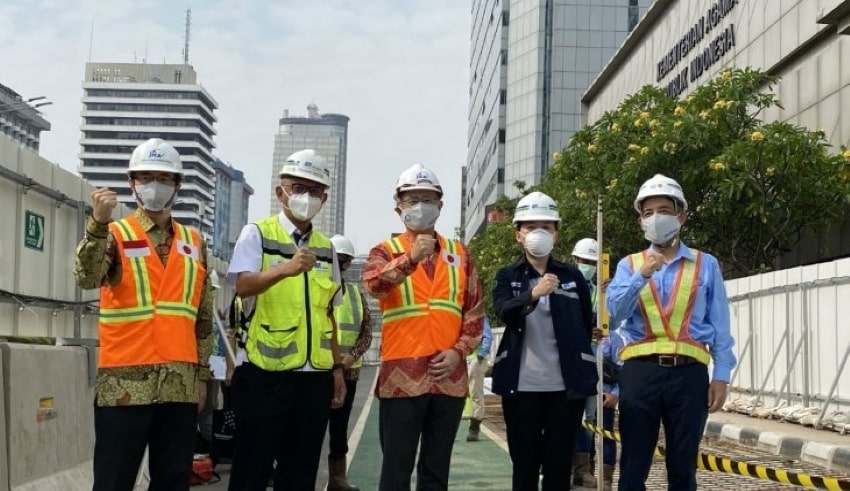 On Wednesday, the Japanese Ambassador for Indonesia Masafumi Ishii, and Chief of JICA’S representative office in Indonesia, Shinichi Yamanaka, visited the construction site for MRT Jakarta’s 201 Work Zone on the North-South route.

“I am impressed with the construction progress that has run according to the schedule, even though the COVID-19 pandemic is yet to slow down. The MRT project is a symbol, both for the friendship and cooperation between Japan and Indonesia,” Ambassador Ishii said in a statement on Wednesday, September 16.

Ishii also hoped that the extension of the MRT rails enriches the lives of Jakarta citizens.

President Director of PT MRT Jakarta, William Sabandar said, the MRT Phase II consists of two project packages. The first one is MRT Phase 2A, which covers the route from the Hotel Indonesia area to the Kota area, and the second one is Phase 2B, running from Kota to West Ancol.

Two stations will be the biggest station with a length of 400 meters, there are Thamrin Station and Kota Station. Those stations will have 10 entrances installed along with a 200-meter long commercial area and is directly integrated with Transjakarta.

MRT Phase 2 will have a 7.8-kilometer line and be built on the ground (at grade) located in Kampung Bandan, North Jakarta. The other seven stations will be built underground.

There are 7 underground stations, including Sarinah, Monas, Harmoni, Sawah Besar, Mangga Besar, Glodok, and Kota. The underground station will have a depth ranging from 17 meters to 36 meters. MRT Jakarta Phase 2 of the HI-Kota Roundabout route will be built with a length of 5.8 km.