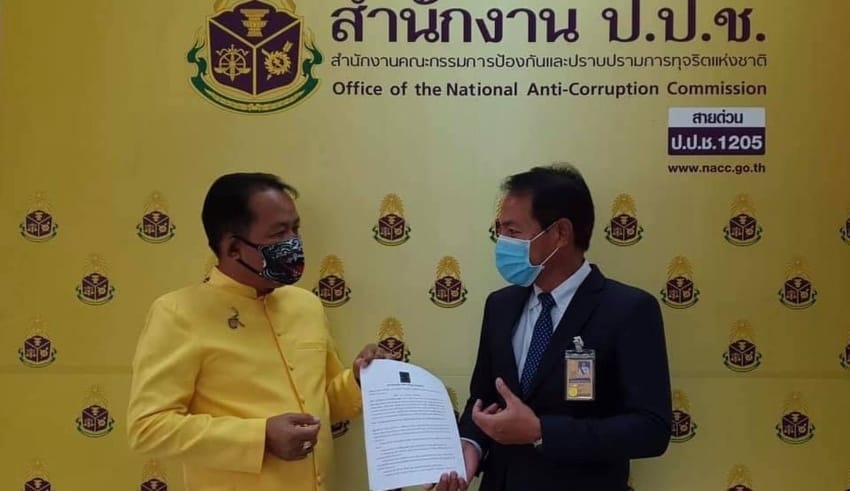 Srisuwan Janya, Secretary-General of the Association for the Protection of the Constitution, submitted a petition to the National Anti-Corruption Commission (NACC) .
(C) Bangkok Post

Srisuwan Janya, Secretary-General of the Association for the Protection of the Constitution, submitted a petition to the National Anti-Corruption Commission (NACC) on Sunday calling on it to examine the accusation of bribe demand against a sub-committee member of the Committee on Budgetary Scrutiny of the House.

The accusation was made by Sakda Wichiansilp, Director-General of the Groundwater Resources Department (DGR), who said that a subcommittee member whom he did not name had requested 5 million baht in order for the panel to approve the budget presented by his department without being changed.

In view of this, Mr Sakda made the accusation when defending the DGR ‘s request for the budget before the subcommittee. Mr Srisuwan said it was very bad for the politics and administration of the country, if that was real. It was disgusting to demand a bribe in this way, and would not happen in a democratic country.

This will also have negative impacts on the administration of the country and erode the confidence of investors in the management of the country. Mr Srisuwan said that the NACC had the authority to invite people involved in this matter, in particular the Director-General of the DGR, to make claims about who had made a telephone call in the sub-committee to demand the bribe.

The NACC may also ask for minutes of the meeting to see whether any member of the sub-committee had attempted to meet Mr Wichian. Mr Srisuwan suggested that if Mr Wichian was invited to testify, the NACC should also invite the Pheu Thai MP for Uttaradit, Saranwut Saranket, to provide information because he had previously mentioned such bribery. Mr Srisuwan also called on the head of the executive branch, Prime Minister Prayut Chan-o-cha, to set up a committee to look into the matter