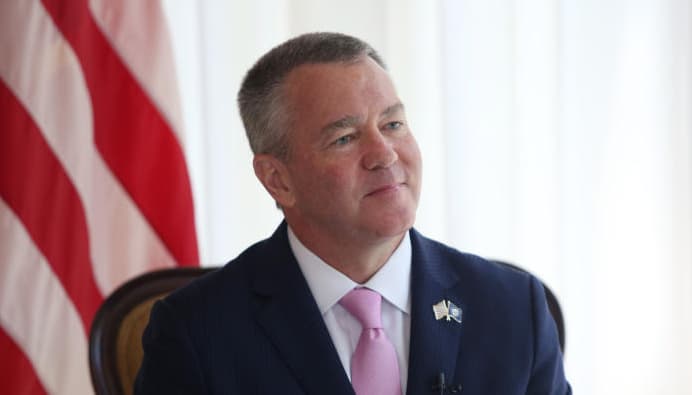 New US ambassador in Thailand focusing on economy
(C)BangkokPost

After a year and a half, a new US ambassador to Thailand has finally landed. Ambassador Michael G DeSombre, who took up his post earlier this month said taking sides in Thai politics is not the way to go and he will rather focus on promoting businesses, with energy and digital ventures, infrastructure and manufacturing projects also on his radar.

The ambassador on Wednesday spoke to the media but was careful to tread a non-partisan path despite recent disruptions on the political front. “For the students’ movement in Thailand,” he said, “we are watching what is going on. We support democracy and do not support any specific party so we don’t take sides.”

Asked if he thinks Thailand is democratic or not, he said it is, in its own way. “After the elections of March of last year, we said Thailand had stood up with democratically elected government. Every democracy is different. Every democracy is challenging. Every democracy, quite honestly is messy at times. But Thailand is also young democracy and it’s developing. And we are looking to help Thailand continue down its road, its road to democracy,” he said. Ambassador DeSombre is the first political appointee to the US ambassador’s post in Thailand in almost 50 years. Formerly a lawyer in business negotiations, Ambassador DeSombre said his focus will be promoting the economic relationship.

Among examples of how US-Thai relations can be linked to Bangkok’s role in Asean, the ambassador gave an example of the joint drug suppression operations in which the US enforcement administration works jointly with the Royal Thai Police and its counterparts in Myanmar and Laos. Finally, Ambassador DeSombre said he does not think the US elections will change policy on US-Thai relations. “We are fortunate the Indo-Pacific Strategy of the Trump administration enjoys its bi-partisan support,” he said.