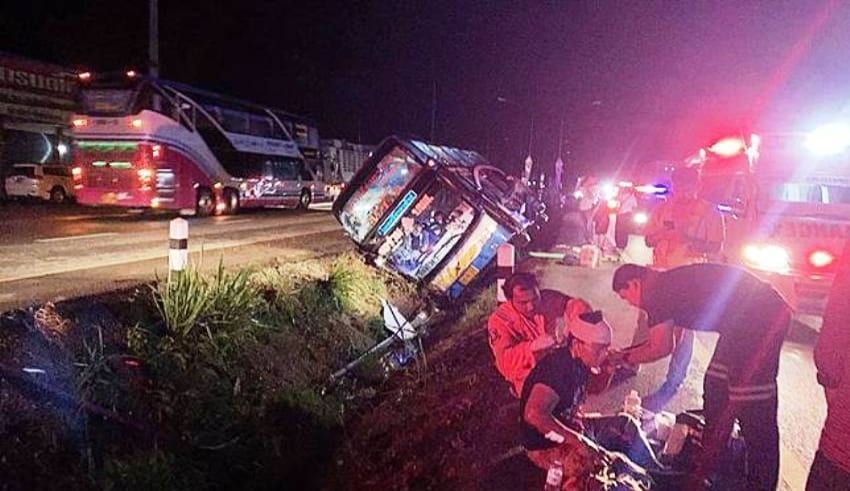 Five passengers received minor injuries when their tour bus ran off Phetkasem highway and crashed into the median ditch in Southern Thailand on Monday night. Police said the accident occurred about 11.10pm in Prachuap Khiri Khan.

The Bus driver, Mr.Preecha Chansingkhon, 68, told police he left Bangkok early on Monday night for Nakhon Si Thammarat. Nearing the Bang Saphan intersection, a bicycle cut in front of the bus, crossing to the other side of the road. He swerved to the side to avoid hitting the bicycle, and the bus crashed into the centre ditch. Causing the top heavy double decker bus to topple onto its side. Three men and two women passengers were slightly injured. They were admitted to Bang Saphan Hospital in Southern Thailand’s Prachuap Khiri Khan Province. Two power poles were also brought down by the bus. Furthermore the damage was estimated at about 200,000 baht.

Meanwhile, in Bangkok a rehabilitation plan will allow the loss-ridden bus agency to deliver better services for bus passengers and make bus travel a more attractive option. Above all for private car users, says transport permanent secretary Chirute Visalachitra. The plan, endorsed by the State Enterprise Policy Committee (SEPC), has been drawn up with the aim of improving the Bangkok city’s bus services. Also helping the The Bangkok Mass Transit Authority become financially viable, he said. It entails the BMTA deploying 3,000 buses on 108 routes. While licensed private firms will operate 1,500 buses on another 54 routes and will be paid a per-kilometer rate. Equipped with GPS, an e-ticketing system and universal design. The bus fleet will also make travel in and around Bangkok more convenient. The vehicles will also be environmentally friendly, either powered by electricity or natural gas. According to the Bangkok Post, bus travel will become cheaper, with a one-day flat-rate fare of 30 baht being introduced. “The rehabilitation plan is also aimed at delivering improved services. Which will encourage more people to switch to the public transport system and help reduce traffic congestion and pollution,” he said. Kanit Wattanawichian, a former BTMA board member, on Monday welcomed the rehabilitation plan and applauded the agency for hiring private companies to operate part of the service, as opposed to running its own exclusive fleet.