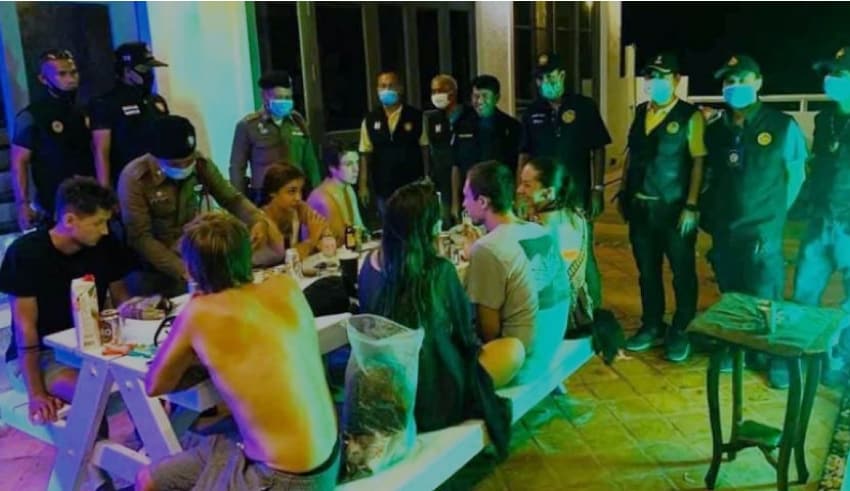 Authorities on the Island of Koh Phangan in Southern Thailand have arrested 7 Russian tourists for violating the emergency decree. All 7 Russians were caught partying and drinking on Sunday night, police said.

Acting on a complaint filed by local residents on Koh Phangan, police raided a house at Nai Wok village shortly after midnight. According to the Bangkok Post, neighbours said they were being annoyed by a group of foreigners holding a party and playing loud music. When the police arrived, they found the seven Russians, men and women, in the house. An amount of marijuana was also found. The tourists were taken to Koh Phangan police station where they were charged with violating the emergency decree and using illegal drugs.

Two weeks ago, Krabi tourist police found a Russian tourist couple living in a tent inside a cave in Tonsai Bay. They were allegedly kicked out of their hotel. They had been stuck in Thailand due to the COVID-19 situation and can’t return back to Russia. The Russian tourists stated that they came to visit Krabi Province and its been over 2 months since their arrival in Thailand. Last month the couple visited the police station to file a report after their drone and camera went missing. Police couldn’t track down their belongings so the couple had no choice but to let the issue go. Then around the beginning of the month, new safety measures shut down their hotel. They had nowhere to go and because they didn’t know anyone they had to find their own methods of survival.

They found a cave located in Tonsai Bay and set up a tent inside and have lived there ever since. The couple were taken to a private hospital for a health check. Both were healthy and were cleared of COVID-19. The couple told Krabi police that they could not get back to Russia until the COVID-19 situation improves. Police took the Russian tourists to a hotel in Krabi, one of the 4 hotels that are allowed to remain open. The hotels are open to assist foreigners who are still stuck in Thailand.