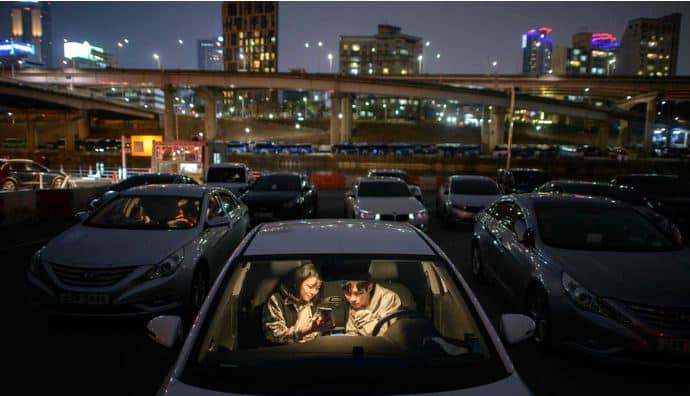 A long queue of cars forms in front of a drive-in cinema in Seoul, as South Koreans look for safer spaces to enjoy a movie without the risk of contracting the coronavirus raging across the world.

Box office numbers in South Korea — which has 8,897 confirmed virus cases — have plummeted in recent weeks due to the epidemic, with authorities urging the public to avoid large crowds. But at Park Dong-ju’s drive-in cinema, moviegoers can enjoy a film from the comfort of their cars, parked in front of a large outdoor screen. “We’ve had a 10-20 percent increase in sales for weekdays, and sell out on weekends,” Park said, adding: “We’re definitely getting many more calls and internet inquiries after the coronavirus outbreak.”

A website for his drive-in cinema shows a large banner that reads, “Open throughout the year”, a stark contrast to some theatres worldwide forced to suspend business over virus fears. Choi Jin-young, a 22-year-old hospital worker, said she had to wait two hours for tickets and was worried that it might sell out for the weekend.

South Korean Prime Minister Chung Sye-kyun urged religious, indoor sports and entertainment facilities to suspend operations for 15 days, asking the public to work from home and refrain from going outside.