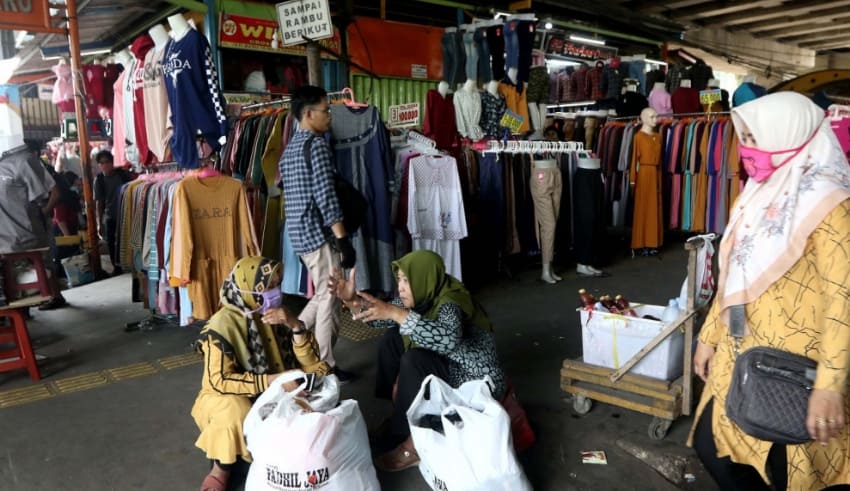 Tanah Abang and Jatinegara markets crowded ahead of Eid,
(C) The Jakarta Post

The condition of Tanah Abang Market is still crowded with traders and buyers a few days to celebrate Eidul Fitr or Lebaran although there are still large-scale social restrictions (PSBB). However, PD Pasar Jaya Managing Director Arief Nasrudin stressed that the crowded place was not his authority.

“Pasar Jaya is closed. What is crowded is the market outside Pasar Jaya. (I) do not want to go down, but its authority,” Arief said as quoted by detikcom on Friday, May 22.

Yasril explained, the manager of the crowded area came from individuals. There are those who are taking the ration behind the hectic Tanah Abang market today.

The ‘naughty’ traders who sell are from traders whose daily trade is on the Tanah Abang sidewalk. They make use of the houses of local residents and stalls that were built illegally.

Yasril also regretted the presence of traders who violated the PSBB. Although the need to trade is very urgent.

Meanwhile in another market, Jatinegara public order enforcers (Satpol PP) officers, East Jakarta, deflated the Jatinegara Market consumer vehicle tires. The action had to be carried out by officers because they thought the residents did not obey the rules of the PSBB, Friday afternoon.

“Already, we have made it orderly. So the one who parked the motorbike was already operated on unplugging, then we have urged the inside and we sterilized it,” said Head of Satpol PP Jatinegara Kasatpel, Sadikin, in Jakarta as quoted from Antara, Friday (5/22).

The Jatinegara Market was reportedly crowded with visitors since the morning amid the Covid-19 outbreak. Thousands of consumers and traders interact without worrying about contracting Covid-19.

Sadikin said, the crowd was triggered by consumer consumptive behavior after the momentum of disbursing holiday allowances.

In fact, the PSBB is still being applied to prevent coronavirus that caused Covid-19. “I see traditional markets are starting to get crowded because many people are shopping in preparation for the holiday,” Jokowi said in a limited cabinet meeting via video conference on Tuesday, May 19.

Jokowi did not mind the crowd in the market as long as strict procedures were implemented to prevent Covid-19.

However, Jokowi’s statement raised questions from the People’s Representative Council (DPR) Commission VIII which assessed that Jokowi’s statement to allow crowds in traditional markets in the midst of the Covid-19 pandemic, violated the implementation of PSBB in a number of areas.

“Yes, it doesn’t violate anymore, it’s above violates its name, it’s inconsistent. Don’t know the rules of the game, then just revoke the PSBB,” DPR Commission VIII chairman Yandri Susanto said when contacted by reporters on Tuesday, May 19.