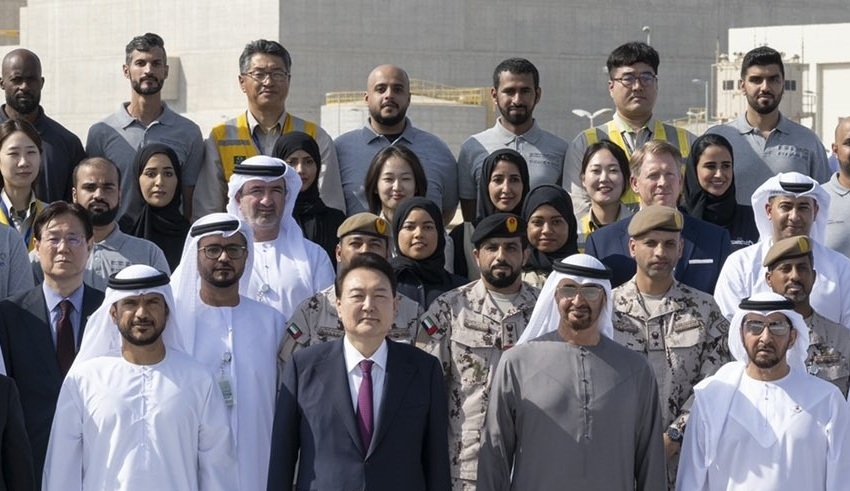 The visit is in line with efforts to expand the current Special Strategic Partnership between the UAE and South Korea, as evidenced by the recent signing of a number of agreements at the government level.

The two presidents lauded the remarkable accomplishments made over the course of more than a decade at the Barakah Plant, the first civil nuclear energy plant in the Arab World and the region’s largest source of clean power.

His Majesty Sheikh Mohamed bin Zayed and President Yoon saw the Barakah Plant, which produces clean, emission-free electricity to power the UAE in a sustainable manner. The two leaders observed the ongoing operation of Units 1 and 2, the completion of Unit 3, and the progress made on Unit 4 in accelerating the UAE’s clean energy transition, generating the carbon-free baseload electricity the UAE needs to complement its renewable projects in order to realize its commitment to achieve Net Zero by 2050.

Asia Cup in September, but schedule and location are still unknown

From 2026, the UAE will ban single-use plastic goods

During their tour, the leaders met with the teams working at Barakah, which included Emirati and Korean nuclear energy professionals as well as specialists from across the world. More than fifty nationalities are employed in Barakah, which, once fully operational, would supply up to 25 percent of the United Arab Emirates’ energy demands without emitting any carbon dioxide while liberating the equivalent of billions of dollars’ worth of natural gas resources.

His Majesty Sheikh Mohamed bin Zayed lauded the efforts of the Emirati and Korean professionals who have developed the Barakah Plant in compliance with the highest safety requirements and best practices in the nuclear energy business over the last decade. As a consequence, the Barakah Plant has become a model for other nuclear energy projects across the world, providing the UAE with strategically significant clean energy.

His Majesty Sheikh Mohamed stated that the unique strategic alliance between the United Arab Emirates and the Republic of Korea has yielded substantial benefits for both nations, enabling bilateral collaboration in a number of essential industries, including nuclear energy. The partnership plays a crucial role in supporting international efforts to achieve global energy security and promote sustainable development – aims that are essential for all nations in light of the simultaneous crises of energy security and climate change.

The decade-long partnership between the United Arab Emirates and the Republic of Korea in the development of the Barakah Nuclear Energy Plant has improved the bilateral relationship. In 2009, the United Arab Emirates prioritized energy security while expediting the shift to greener energy sources through the use of civil nuclear energy. His Highness Sheikh Mohamed bin Zayed remarked, “I am happy of the Emirati, Korean, and international teams working together at Barakah as they finish another Unit to improve the UAE’s clean power portfolio and set the worldwide norm for nuclear energy project delivery.”

The two presidents lauded initial work on the recently created Net Zero Acceleration Programme, which builds on both nations’ shared interest in expanding collaboration in the energy sector and their track record of implementing complex energy megaprojects. Through the program, the two nations will discover and create projects that contribute to Net Zero in both nations and internationally. They will harness competitive advantages to offer Net Zero infrastructure at a cheaper cost across the whole spectrum of technologies necessary for a successful transition to renewable energy.

In his speech, South Korean President Yoon Suk Yeol emphasized that the Barakah nuclear fleet, of which two units are active and the other two will soon be operational, reflects the particular strategic relationship between the United Arab Emirates and the Republic of Korea. “Building on the success that we have achieved as partners at Barakah and leveraging Team Korea’s excellent nuclear technology and experience, it is now time for us to take our partnership to a higher level by delivering additional cooperation in the UAE and advancing into nuclear markets in third countries. I believe that my visit will signal a turning point for our comprehensive and strategic energy relationship, which would include fields like as hydrogen, renewables, and carbon capture and storage in addition to nuclear.”

Since the 1970s, the UAE and South Korea have maintained strong connections. In 2009, the UAE granted Korea Electric Power Company (KEPCO) the Prime Contract for the building of the Barakah plant, which at its peak of development was the biggest nuclear energy project in the world. The relationship entered a new chapter of collaboration in 2016, when ENEC and KEPCO inked a Joint Venture agreement to support the Barakah Plant’s sustainable operations for the next 60 years and beyond. In 2018, the bilateral relationship was elevated to the level of Special Strategic Partnership, and the UAE and Korea have now extended their partnership via a framework to spearhead clean energy development domestically and internationally, bringing economic and environmental benefits through the export of new projects, the use of advanced technologies such as SMRs, and the production of clean hydrogen.

Once fully operational, the Barakah Plant will offer ample, clean, and dependable energy 24 hours a day, seven days a week to the UAE’s businesses and over 500,000 residences, while also supporting the UAE’s plan to become a net exporter of LNG by 2030. As the nation prepares to host COP28, the Barakah Plant is averting millions of tons of carbon emissions yearly and assisting in meeting the rising energy demand.

The UAE-Korea Business Forum was organized by the Abu Dhabi Chamber of Commerce and Industry in collaboration with the Korea International Trade Association (KITA). President of the Republic of South Korea Yoon Suk-yeol was in attendance. During the Forum, His Excellency urged Emirati investors to take advantage of South Korean investment possibilities and expertise in key industries, underlining South Korea’s commitment to developing economic cooperation and partnerships with the UAE, its key Middle Eastern partner.

His Excellency Abdulla bin Touq Al Marri, UAE Minister of Economy, His Excellency Ahmed Al Sayegh, UAE Minister of State, His Excellency Abdulla Mohamed Al Mazrui, Chairman of UAE Chambers and Abu Dhabi Chamber, and a number of Board Members of Abu Dhabi Chamber were in attendance at the Forum. The Forum was also attended by H.E. Christopher Koo, Chairman of the Korea International Trade Association (KITA), as well as senior officials and private sector representatives from both countries, who discussed ways to strengthen trade relations and diversify economic cooperation between the UAE and South Korea.

“The Korea-UAE Business Forum is an excellent opportunity to discuss the strengthening of the existing economic partnership between the UAE and South Korea in the coming stage, at a time when the global economy is undergoing significant changes and the UAE is accelerating its transition to a new economic model,” said His Excellency.

His Excellency Abdulla Mohamed Al Mazrui, Chairman of Abu Dhabi Chamber, stated in his opening remarks, “The Forum represents an exceptional opportunity for participants from the public and private sectors to exchange experiences, explore opportunities for cooperation, and build strategic partnerships in sectors of common interest.”

His Excellency said, “The United Arab Emirates and South Korea have stable and robust connections, which have helped increase collaboration and partnerships between the two nations in many spheres, including political and commercial relations. I’d like to thank all of the event’s organizers, but KITA in particular for its crucial role in exposing investment prospects, managing the growth of current collaborations, and paving the road for future collaboration. This plays a crucial role in supporting the two nations’ aspirations to shape a brighter future and build upon their accomplishments in essential economic areas such as energy, infrastructure, biology, medicine, space, defense, and future technology.”

Christopher Koo, Chairman of the Board of Directors of KITA, stated, “The Republic of South Korea is convinced that it will become one of the leading economic cooperation partners of the United Arab Emirates, a nation with whom we are extremely proud of our ties. South Korea and the UAE have created confidence and partnered on important initiatives for more than four decades, including the establishment of the Korea-UAE Private Economic Cooperation Committee to advance the holistic development of the two nations.”

As part of the Forum, 23 cooperation-enhancing agreements were inked between the two sides. In addition to bilateral discussions, the Forum featured presentations by a number of authorities from both nations on major investment prospects in a variety of critical areas.