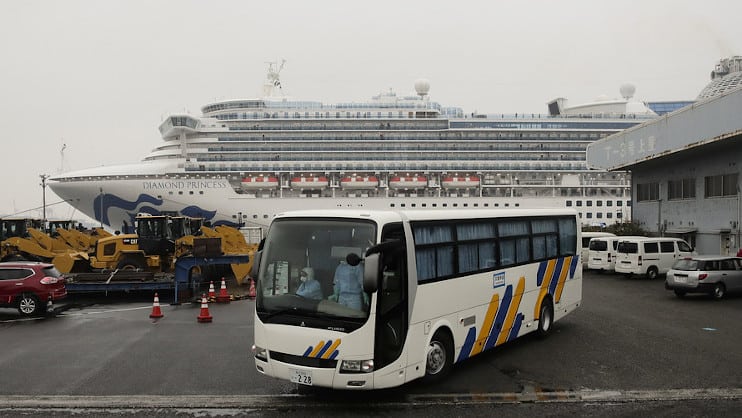 The US flew home its citizens from a coronavirus-infected cruise ship in Japan Monday, with other nations preparing to follow suit as global concerns grow over the spread of the disease and the death toll at its Chinese epicentre topped 1,700.

More than 70,500 have been infected across China by the COVID-19 virus as the world battles to contain the outbreak that has sparked panic buying and jitters over the global economic impact. Outside China, the biggest cluster of infections is on the Diamond Princess cruise ship off Yokohama, where coronavirus cases have climbed quickly to 355 despite passengers being confined to their cabins during a 14-day quarantine. And amid growing criticism of Japan’s handling of the ship, governments are scrambling to repatriate their citizens, with Canada, Australia, Italy, Israel and Hong Kong poised to follow Washington’s lead.

In the early hours of Monday morning, a convoy of buses driven by people in head-to-toe protective suits removed American passengers from the ship after a makeshift passport control.

The US embassy in Japan confirmed two jets had left Japan en route to the US. Those on board were expected to undergo a further 14-day quarantine period on US soil.

With tourism battered and global supply chains disrupted by the virus, experts are fretting about the toll it could take on a fragile global economy. IMF chief Kristalina Georgieva said there could be a cut of around 0.1-0.2 percentage points to global growth but stressed there was “still a great deal of uncertainty.” Japan, one of the hardest-hit countries outside China irrespective of the Diamond Princess, suffered its biggest economic slump in more than five years — even before the coronavirus crisis. Gross domestic product in the world’s third-top economy shrank an eye-watering 1.6% in the three months to December — a much bigger contraction than economists had feared.