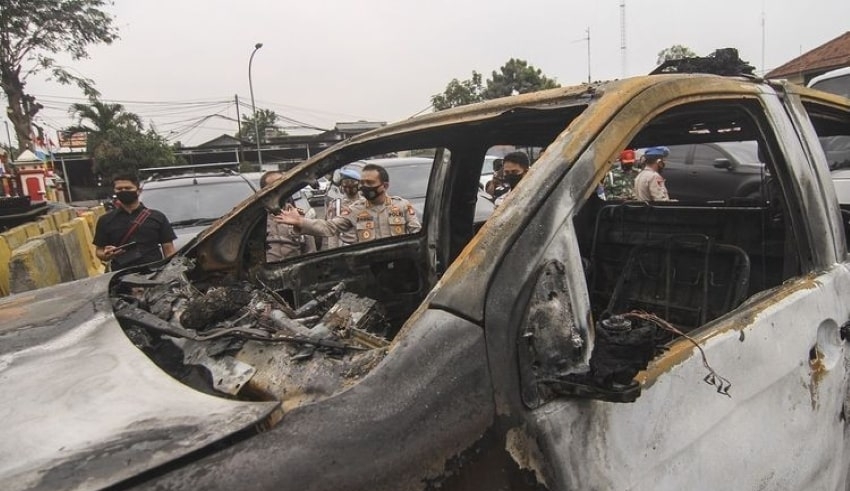 An Indonesian army soldier, with the rank of Second Private (Prada), initials MI, has been named a suspect in the alleged attack on the Ciracas Police Station.
(C) Jakarta Post

An Indonesian army soldier, with the rank of Second Private (Prada), initials MI, has been named a suspect in the alleged attack on the Ciracas Police Station, East Jakarta on Saturday morning, August 29.

There are two motives for spreading false information about the single accident experienced by MI which led to the attack on the Ciracas Police Station.

“First, there is a feeling of fear towards the unit if it is found out before a single traffic accident, MI was drinking alcohol,” said Lt. Gen. Dodik Widjonarko’s Central Military Police Command (Puspomad) during a press conference on Wednesday, September 9.

The witnesses with the rank of Chief Sergeant and Second Private, initials ZBH and AM gave a statement that strengthens the first motive.

The second motive of Prada MI, was to feel ashamed to his leader if it was found out that before the accident MI had drunk alcohol.

During the accident, Prada MI was using a motorcycle with police number B 3680 TZH which was a motorcycle belonging to his leader.

Dodik explained that Prada MI was afraid to be prosecuted because he did not own a driver’s license and did not carry a Vehicle Registration Certificate.

After the investigation, Prada MI was suspected of Article 14 paragraph 1 in conjunction with paragraph 2 of Law (UU) Number 1 of 1948 concerning criminal law regulations with a maximum sentence of 10 years in prison.

After the accident, MI suffered injuries to his face and body but Prada MI confessed to his colleagues that MI was beaten up by several people. Prada MI admitted to his supervisor that he had a single accident.

Because those army soldiers had been provoked by hoax information, they did not check the truth of the information. Then they went to attack the National Police facilities, shops, and also residents that passing by at the location.

In the investigation carried out by the Indonesian Army, 23 people were tortured by the perpetrators.

“We conveyed that the personnel and material losses were up to September 7, there were 119 reporters, 117 people, and 2 police from the recapitulation of the number of complaints, 23 victims of physical abuse,” said the Commander of the Jaya Regional Military Command (Pangdam) Maj. Gen. Dudung Abduracchman at a press conference, Wednesday, September 9.

The perpetrators were mistreated by beating, stabbing, and crushing the victims. Most of the victims were civilians.

The attack carried out by the perpetrators was not justified by the institution and as many as 81 members of the Indonesian Army were questioned in connection with the attack on the Ciracas Police Station.

50 people have been named as suspects and have been detained. Another 23 have been returned to the unit as witnesses only.

Will there be a fifth season of Manifest? Fans were heartbroken when NBC cancelled the sci…