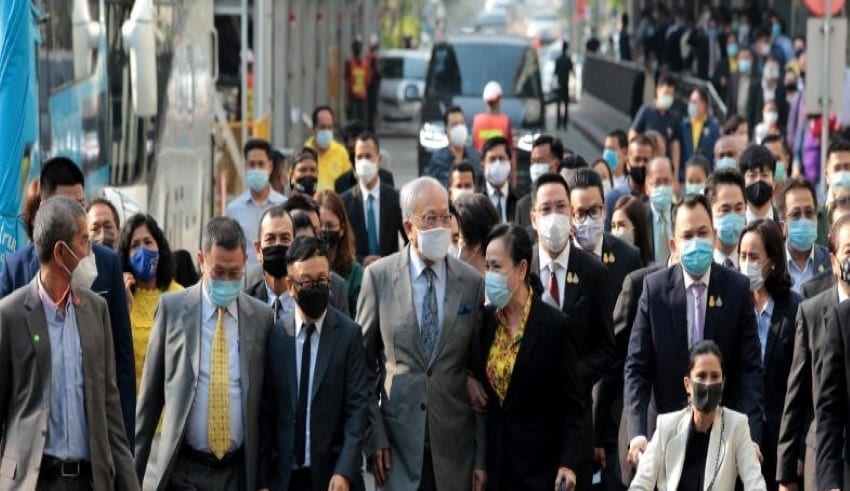 Among 26 individuals who were given changing prison sentences for their jobs in road fights that removed the Yingluck organization.
(C) Bangkok post

A significant reshuffle is on the cards after three bureau leaders were among 26 individuals who were given changing prison sentences for their jobs in road fights that removed the Yingluck organization.

In view of this, the Digital Economy and Society Minister Buddhipongse Punnakanta, Education Minister Nataphol Teepsuwan, both from the decision Palang Pracharath Party (PPRP) and Deputy Transport Minister Thaworn Senneam from the Democrat Party were surprisingly seen as liable by the Criminal Court of charges identifying with showings drove by the now-outdated People’s Democratic Reform Committee.

They were arraigned on a few charges including insurgence, criminal affiliation, unlawful gathering and deterring others from projecting votes during road fights between November 2013 and May 2014 to expel the Yingluck Shinawatra government.

Mr Buddhipongse was condemned to seven years; Mr Nataphol got seven years and four months and Mr Thaworn got five years. The appointee Prime Minister Wissanu Krea-ngam shared that the bureau leaders lost their posts when the prison sentences were given over, refering to Section 160 (7) of the 2017 constitution. It says that a bureau serve should not be an individual who is condemned to jail, whether or not the case is settled or the prison term is suspended, besides in situations where the charge is a minor one or includes criticism.

Inquired as to whether these three bureau clergymen would likewise lose their MP status, Mr Wissanu said they would keep their parliamentary status if the court didn’t slap a political boycott. The reports arose that Deputy Agriculture and Cooperatives Minister Thamanat Prompow and Deputy Labor Minister Narumon Pinyosinwat are looking at the posts left empty by Mr Buddhiponse and Mr Nataphol.

Morever, Mr Suthep highlited that despite the fact that key PDRC pioneers and allies were condemned to jail, they stay focused on maintaining the country, religion and the government. After the decision, eight individuals were accompanied to jail including Mr Suthep, Mr Chumpol and the three bureau leaders.