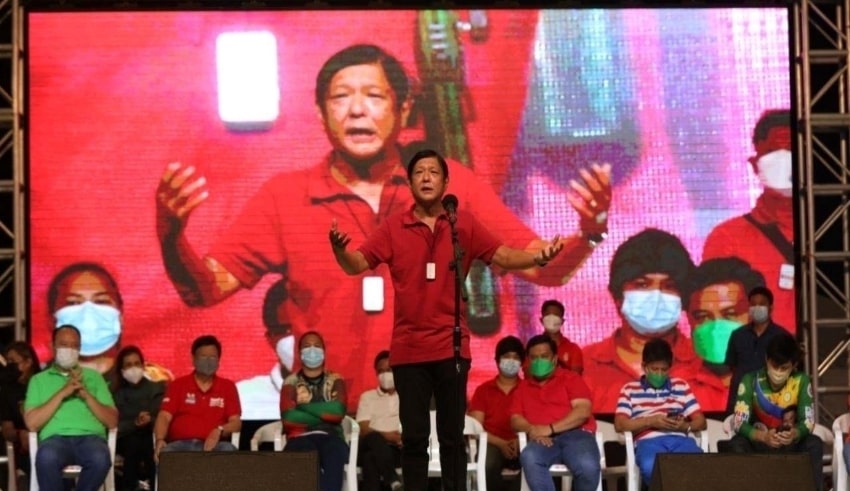 The Presidential aspirant Ferdinand Marcos Jr. has vowed to prioritize the proposed measure that seeks to prohibit labor-only contracting in the country and protect workers from abusive labor practices if he wins in the May 9 polls.
(C) Ferdinand Marcos / Twitter

Philippines – The Presidential aspirant Ferdinand Marcos Jr. has vowed to prioritize the proposed measure that seeks to prohibit labor-only contracting in the country and protect workers from abusive labor practices if he wins in the May 9 polls.

In view of this, He said he plans to pursue the proposed “Security of Tenure” law, a refined version of the controversial “anti-endo” bill vetoed by President Duterte in 2019, after meeting with officials of party-list groups Trade Union Congress of the Philippines (TUCP) and the Associated Labor Unions.

Marcos promised during that meeting to make the bill, which aims to amend the Labor Code by prohibiting labor-only contracting in the private sector, a priority in Congress. He noted, though, that the measure has to be reviewed to ensure that it will live up to its aim of further protecting workers’ rights.

Duterte vetoed the anti-endo bill in 2019 for unduly broadening the scope of labor-only contracting, and effectively banning other forms ‘that are not particularly unfavorable to employees. Thus, the Security of Tenure bill, a refined version of the measure, was refiled in Congress.

Endo or end-of-contract is a practice wherein workers are hired for not more than five months, so employers don’t need to regularize them on the sixth month as mandated by the Labor Code.

Vic Rodriguez, Marcos’ spokesman, said the UniTeam of Marcos and running mate Davao City Mayor Sara Duterte sees the need and urgency to create jobs as a crucial component in the country’s recovery from economic crisis brought by the COVID-19 pandemic.

The Presidential Aspirant Can’t Help to Decline A Certain Interview

The UniTeam is geared at creating more jobs for our people, it is the most pressing need of the great majority of Filipinos right now; and if given a chance to serve the nation, addressing the concerns of workers shall be a top priority, because in solving the challenges of this sector they would already have ironed out a fairly big chunk of the problems being faced by the country today.

Morever, The camp of Marcos made the commitment as it welcomed the endorsement for his candidacy from the TUCP the country’s biggest labor group. Meanwhile, Duterte reaffirmed her partnership with Marcos, saying in a post on her official Facebook account that “Bongbong Marcos and Sara Duterte was, is and will always be ONE team. UniTeam. Engaged to work for our country. Mahalin natin ang Pilipinas.

She made the statement after supporters of other presidential candidates Manila Mayor Isko Moreno, Sen. Manny Pacquiao and Vice President Leni Robredo-handed out posters showing their respective bets in tandem with her..