The Asian Affairs > Blog > Malaysia > Anwar advises PMD to explain the allocation of RM11b for political appointees, including RM108m 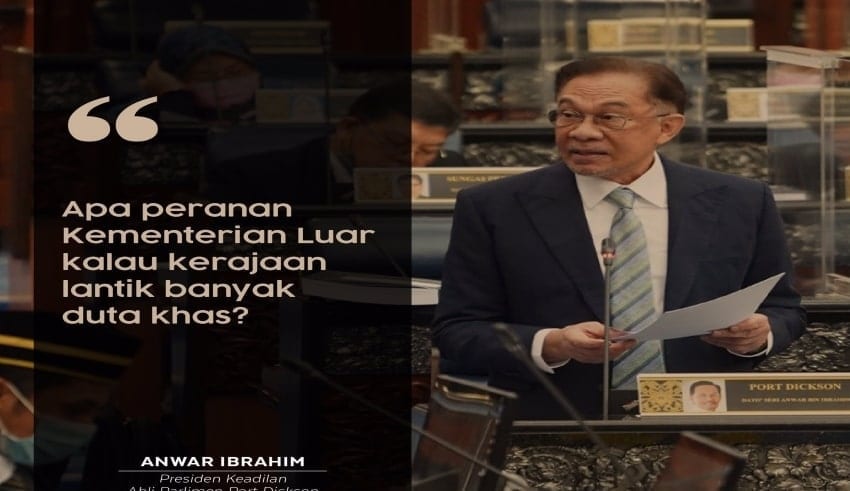 In today’s Budget 2021 discussion, Anwar asked why the PMD needed so many ministers and appointed special envoys who he said were unlikely to be successful as international travel would be restricted during the Covid-19 pandemic.

He said that with a total of 32 ministers, while the whole Cabinet was top heavy, this was most noticeable in the PMD, which has five ministers and five more deputies on its payroll.

Anwar honed in on a budget entry for the PMD that included allocations for, among others, a special communications and media advisor, special economic advisor, special functions officer, and special envoys’ offices in the Middle East, China, Japan, Korea and Taiwan.

“I would like to ask what the task of the Ministry of Foreign Affairs will be when we appoint [these individuals] and burden the people and the nation with high expenditure management.”

“It is not worth it to pay wages towards these positions which are ineffective because of Covid-19. Where are these special envoys going to go? They are all in Kuala Lumpur,’’ said Anwar.

He also claimed that the roles of Malaysian ambassadors were essentially conflicting with special envoys, who are called ministers.

The Port Dickson MP said that for next year, the line item he cited above was responsible for RM482 million.

Anwar also argued against an allocation of RM108 million for political appointees, arguing that the money was required elsewhere in the country to improve the welfare of frontline staff fighting against Covid-19.

“I want to ask, what is the link between this RM181 million and the suffering of the poor and the unemployed who are now asking consideration and attention from the government,’’ he said.

Later, by saying that the PMD needed the funds to rehire the workers and appointees who were fired under the Pakatan Harapan administration, Arau MP Datuk Seri Shahidan Kassim retorted.

i love this wonderful article