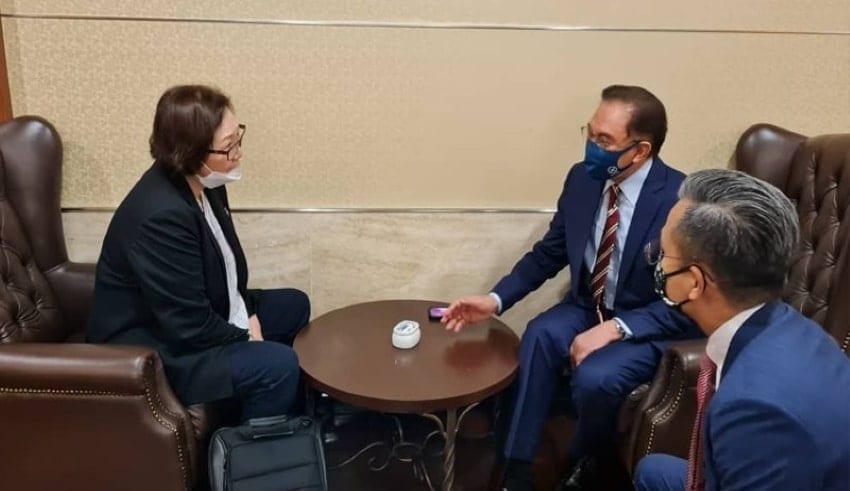 PKR President Anwar Ibrahim met with Christina Liew, head of Sabah's party, for talks less than a week after former Chief Minister and Warsaw President Shafie Apdal called for a change in the leadership of the opposition.
(C) freemalaysiatoday

KOTA KINABALU: PKR President Anwar Ibrahim met with Christina Liew, head of Sabah’s party, for talks less than a week after former Chief Minister and Warisan President Shafie Apdal called for a change in the leadership of the opposition.

In the national opposition leadership, which he described as disunited and directionless, Shafie Apdal had called for a shift across the board.

Liew, who is also Sabah Pakatan Harapan leader, said in a statement that the “foreseeable changes in the political landscape in Malaysia and preparations for the 15th general election” were among the topics addressed.

“The political situation at present is very complex. “Nevertheless, it is unlikely that the nation will hold new parliamentary elections any time soon as we do not want to compromise on the safety and general well-being of the people (during the Covid-19 pandemic),” she said.

The Tawau MP did not go into depth about the discussion points. PKR communications director Fahmi Fadzil was also at the conference, held today after the parliamentary sitting.

Shafie had reported on Saturday that the opposition would struggle at GE15 if the same old leadership stayed at the helm. This caused a reaction from leaders of the Sabah PKR who did not take the remarks that were considered to be aimed at Anwar too kindly.

State youth chief Raymond Ahuar said the leadership of Pakatan Harapan remained powerful and said that parties such as Warisan and Pejuang were the ones that undermined the opposition by failing to support the efforts of the coalition in Parliament.

Sabah PKR information chief Razeef Rakimin also reacted, saying that if it did not want to lose in the general election, Warisan should revamp its leadership ahead of GE15.

On the other side, Sabah DAP, with its acting chief Frankie Poon, has distanced itself from the change in leadership by saying only that whoever was in the federal opposition line-up should be able to support the cause of Sabah.