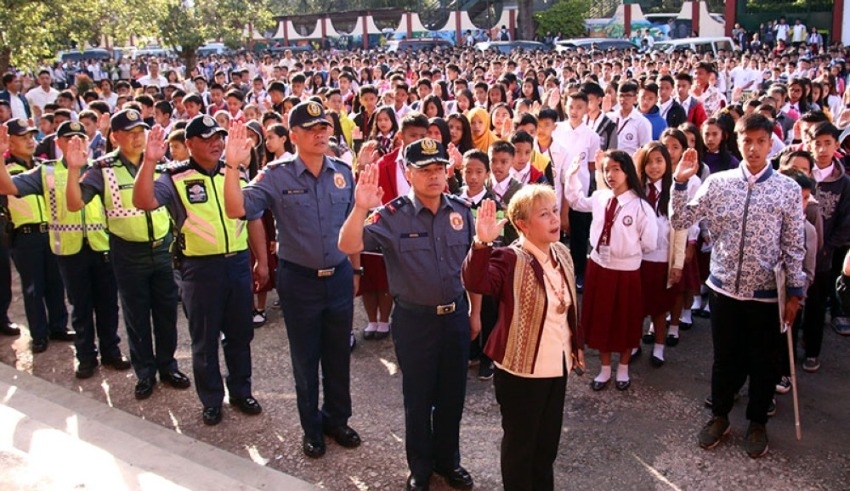 On Tuesday morning, September 27, members of the Baguio police Special Weapons and Tactics (SWAT) unit were stationed at the main campus of Saint Louis University Baguio (SLU) after the SLU Supreme Student Council reported that a threat had been sent to students at both SLU and the University of the Philippines Baguio. The threat was sent to students at both institutions (UPB).

Both the student councils at SLU and UPB posted on their respective Facebook pages on Tuesday that they had received complaints of students at their respective universities receiving threatening text messages via their mobile devices.

The mystery threat sender explained the violent scheme, “Dapat dapat sa inyo may masaktan masampolan para tumigil kayo sa pag laban sa pangulo.” (An example needs to be set, and someone needs to get injured, so that you will cease attacking the President.)

Ilocos Norte, where President Ferdinand Marcos Jr. is from, is considered to be one of the “Solid North” regions because it was one of the areas that provided unwavering support for the two-decade dictatorship of his dictator father and namesake.

In response to Rappler’s inquiry, Saint Louis University stated that they are “in close coordination” with the local police in order to “address the concerns around the threat received to the individual.”

Even before the incident took place, SLU had been on high alert. During the early morning hours of today, the campus was searched and cleared, with the PNP and SWAT team being the most apparent law enforcement agencies. According to a statement made by the institution, “We are devoted to everyone’s safety and we encourage the customary caution.”

The SLU Supreme Student Council (SLU SSC) has asked fellow students to “remain attentive and prioritize their safety.” The SLU SSC has stated that it is working closely with the institution on this matter.

As part of the investigation into the incident, the UPB Student Council has been in communication with administrators at the institution.

Since the beginning of the academic year in August, students at the various universities have participated in ongoing protests. The protesters were successful in their efforts against disinformation campaigns and historical distortion, in addition to their ongoing demand for the secure restart of traditional in-person classes.

The most recent of these protests took place on September 21, and it was held to commemorate the 50th anniversary of the imposition of martial law.

These fascist acts have got to stop right now. According to the statement made by SLU-SSC, “We are one in the call to defend democracy and uphold our human rights.”

UPB-SC stated that one of the most important aspects of ligtas na balik-eskwela (safe return to school) is “upholding the rights and welfare of our constituents by developing and safeguarding safe/democratic spaces online and on the ground.”

Youth Act Now! Against Tyranny (YANAT) Baguio-Benguet issued a statement in which it stated that schools should be a secure environment conducive to learning and critical thinking and should not be exposed to attacks.

Attacks of this type on students who engage in social critique will only create fear and dread to spread throughout the student body. This is undeniably a strategy that the state employs in order to stifle the voices of anyone who would oppose them. In addition, advocating for our rights should under no circumstances be considered an act of terrorism, she continued.