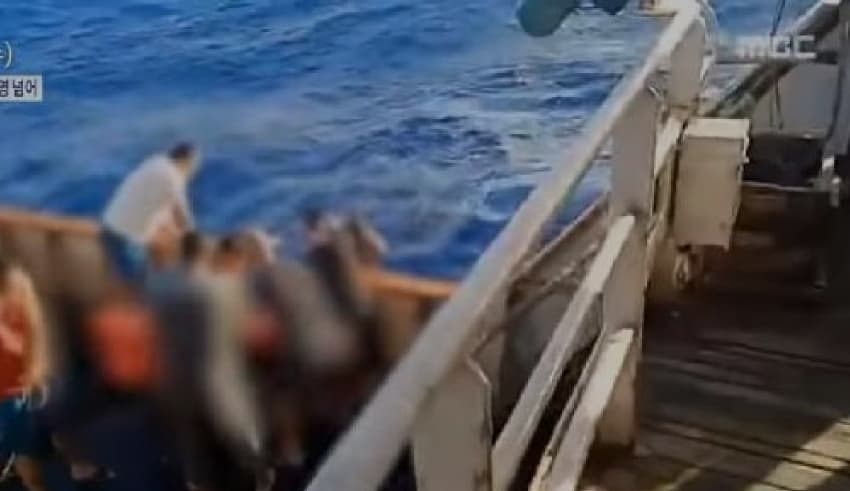 A body of Indonesian ship crew thrown out to sea from a Chinese fishing ship
(C)Tempo.Co

A video showing the throw out of the body of Indonesian ship crew into the sea from a Chinese fishing ship, viral on social media. One of the South Korean television media broadcasted the video and was disseminated by South Korean Youtuber, Jang Hansol in his channel ‘Korea Reomit’.

The video that shows a body of Indonesian ship crew thrown out to sea from a Chinese fishing ship was first broadcasted by Munhwa Broadcasting Corporation (MBC) on May 6, 2020. It revealed slavery practices and the exploitation of the crews. The video was provided by a surviving ship crew to the South Korean government and MBC in an attempt to request for help as the ship moors at Busan Port.

Based on MBC’s investigation, the incident occurred in the Pacific Ocean on March 30, 2020. The video was also shared by YouTube channel MBCNEWS with the title “[Exclusive] Working 18 Hours a Day, If Ill and Died, Buried at Sea”.

“The body that was thrown out to sea is the body of Adi, 24-years old, an Indonesian sailor who died after working on the ship for more than one year,” MBC reported.

Before the body was dumped in a coffin, the Chinese sailors conducted a simple funeral by lighting incense and pouring alcohol.

Ari was not the only victim. Before him, there were two Indonesian sailors’ bodies that were also thrown out to sea, Alfata (19-years old) and Sepri (24-years old).

Based on agreements and regulations, sailors who died on board the ship in the middle of the sea must be returned to their country.

However, Ari’s partner, an Indonesian sailor who wishes to remain anonymous (sailor A), stated in an interview with MBC that he never thought that Ari’s body will be thrown out to sea.

Other sailors admitted that the condition aboard the ship is terrible and the crews are being exploited.

According to another Indonesian sailor (sailor B), the majority of Chinese sailors drink bottled water bought on land. But not with Indonesian crews, who were forced to drink seawater. The Indonesian crews said they feel sick after drinking seawater.

Meanwhile, sailor A said that he has to stand and work for 30 straight hours, and was not allowed to sit except to eat once every six hours.

The Youtuber Hansol discussed and translated MBC’s report and said that based on a document containing a statement from the ship crew, the crew will be cremated and returned to Indonesia if he had died. Also in the document, Hansol said that the crews have insured USD 10,000, which equals to IDR 150 million that will be disbursed to their heirs if they died.

According to her, that was why in her time she wanted illegal fishing, Illegal, Unreported and Unregulated (IUU Fishing) had to be stopped. A similar case is said to have occurred in Benjina, Aru Islands, Maluku Province.

“That’s why Illegal Unreported Unregulated Fishing must be stopped. Remember the Benjina case first? Below is news from Korea,” Susi said as quoted by Detikcom on Thursday (05/07/2020).

Susi reminded the public of the case of human slavery in Benjina, which had been happening for years. In Somali waters, it is also said that there were cases of ABK Indonesian citizens who were starving and released one by one to the beach.

Susi explained how the IUUF worked so far. She said IUUF is a transnational crime committed in several sea areas, by crew and crew from several countries. “The catch is sold to several countries, violating the laws of many countries,” he explained.

The violations committed are not only about catching marine life. It is not uncommon for the perpetrators of illegal fishing to smuggle various commodities including drugs through sea routes which are difficult to be randomized. Various violations from the sovereignty of the sea to human slavery are also often mentioned.

Meanwhile, the Ministry of Transportation guarantees the rights of the crew members who have died on Chinese-flagged vessels.

The Director of Shipping and Maritime Affairs of the Directorate General of Sea Transportation, Sudiono, ensures that the families of crews will get their rights. This right is in the form of payment of salaries and compensation to crews while working in accordance with applicable laws and regulations.

Sudiono mentioned that at this time, the incident that occurred by ABK Indonesian citizens who work on Chinese-flagged fishing vessels has been handled by the Government. Ministry of Foreign Affairs, National Agency for Placement and Protection of Indonesian Workers (BNP2TKI), Ministry of Maritime Affairs and Fisheries (KKP), and Directorate General of Sea Transportation of the Ministry of Transportation.

There are 14 crews who survived and are currently undergoing a period of quarantine coronavirus in South Korea.

Indonesian Ambassador to South Korea explained Umar Hadi, the ship where the Indonesians worked was a Chinese-flagged fishing boat named Long Xing 629. A total of 15 Indonesian crew members from the Long Xing 629 ship were then transferred to another ship and finally docked at Busan port on April 24 then.

But not all of the 15 Indonesian citizens are in healthy condition. One of them got sick and died. The 14 crew members are still undergoing a quarantine period of 14 days in Busan. Now 13 days have passed. The condition of 14 Indonesians is hale and hearty