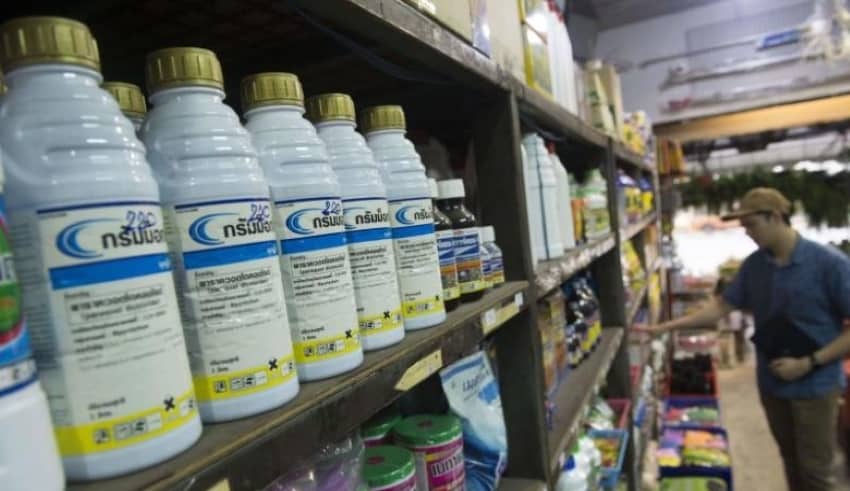 A party of about 30 farmers protested in Bangkok calling on the government to amend its ban on paraquat and chlorpyrifos being used in agriculture.
(C) ST

A party of about 30 farmers protested in Bangkok calling on the government to amend its ban on paraquat and chlorpyrifos being used in agriculture. The prohibition on the usage of these two organic pesticides comes into effect on June 1 and some farmers reject it, finding certain insect management agents ineffective.

Led by the Secretary-General of the Safe Farming Confederation, Sukan Sangwant to, yesterday the party gathered outside the Department of Agriculture house, the Bhumjaithai Party headquarters, the Consumer Federation house and the Government House.

The organization repeated its position that the pesticides are no alternative and that farmers know how to use them safely. Mr Sukan said many farmers are angry as they are forced to return any prohibited chemicals they have left to shops or risk 10 years in prison and a penalty of 1 million baht.

While these farmers are forced by 29 Aug to return the banned chemicals, they are not obliged to return their capital. If the government persists on prohibiting the chemicals, shipments of agricultural goods from countries that still use paraquat and chlorpyrifos for crops will be banned, he added. The state will also enforce a zero-tolerance policy on imports of agricultural goods tainted with chemical substances.

Unless that was not achieved by the government, the farmers would find importing the products as double standards. The organization has reiterated its appeal for the government to restrict the usage of paraquat and chlorpyrifos, rather than enforcing a complete prohibition.

The party submitted a petition with the Central Administrative Court on June 11, demanding an injunction to authorize the usage of paraquat and chlorpyrifos, which the National Hazardous Substances Committee outlawed. During the planting season, it cited the need for the substances to cope with weeds.

The step was the second effort by the party to obtain safety in court.