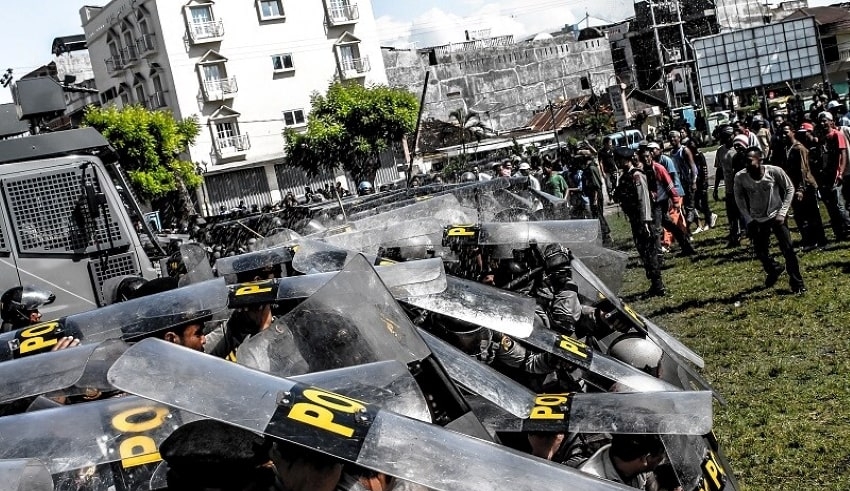 Here’s what’s happening as Indonesian police used water cannons and tear gas to disperse demonstrators protesting against a new employment law in two cities on the island of Java.

Earlier, at the start of a three-day national strike against President Joko Widodo’s “omnibus” Job Development bill, which was signed into law on Monday, thousands of employees and students protested peacefully throughout the archipelago.

Elshinta showed how police are using water cannons late at night against hundreds of demonstrators in the town of Serang, in the province of Banten, about 70 km (43.5 miles) west of Jakarta. In fact, Banten Police Speaker Edy Sumardi Priadinata stated that by 9:15 pm local time the situation was under control and that two police officers were wounded by rocks thrown at them, but did not respond to further inquiries.

In Bandung, capital of West Java Province, police used tear gas against demonstrators who hurled rocks and fire crackers and damaged a police car.The site also announced that 10 demonstrators had been detained by police. A West Java police spokesman could not be contacted immediately for comment. In Jakarta, there were no major protests. Police blocked employees in front of the national parliament from demonstrating, citing the need to control the spread of coronavirus.

Critics of the omnibus bill, which revises more than 70 current laws to speed up restructuring of the largest economy in Southeast Asia, argue that it is too pro-business with the elimination of labor rights and the relaxing of environmental regulations. In order to boost the investment climate and create jobs, government officials say the law relaxes strict labor regulations and streamlines environmental laws.