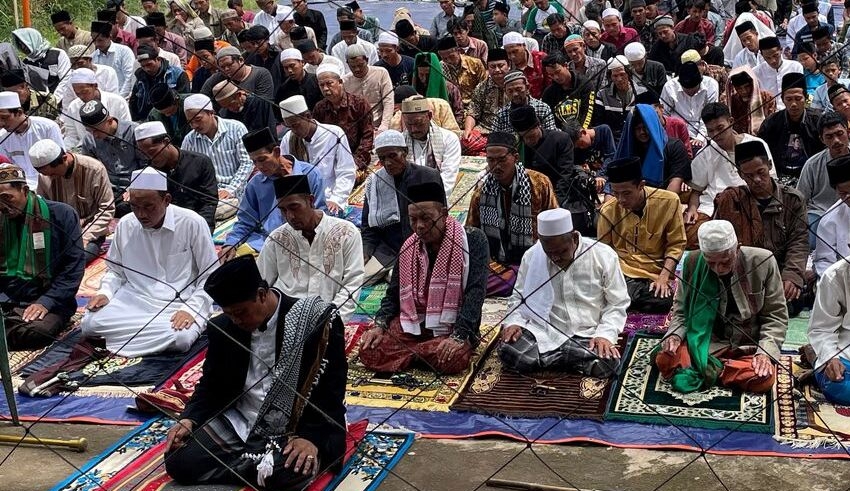 Indonesians prayed in the open alongside rice paddies and in the streets as the dead toll from an earthquake that leveled their town in western Java.
(c) Reuters

On Friday, November 25, hundreds of Indonesians prayed in the open alongside rice paddies and in the streets as the dead toll from an earthquake that leveled their town in western Java increased to 310.

Muslim cleric Muhamad Jamhur led a congregation in prayer in an outdoor volleyball court just 200 meters (0.1 miles) from a mosque whose walls were cracked and windows were shattered by the shallow magnitude 5.6 earthquake that struck the town of Cianjur, approximately 75 kilometers south of the capital Jakarta, earlier this week.

“After the catastrophe, we continue to fear. Therefore, we had to relocate to this volleyball court, not a mosque. I encouraged the congregation to remain vigilant because another calamity may occur,” said Muhamad, 52.

Hundreds of aftershocks have shook the mountainous region, where traumatized and bereaved inhabitants are hiding in tents while awaiting food, water, and medication supplies that have been hindered by severe rains and landslides.

Asep Hidayat, a food seller who, like many others, lost his home in the earthquake, expressed gratitude for the opportunity to pray, even if not in a mosque.

“Even if we are in a shelter, we are obligated to continue praying,” he stated.

The majority of Indonesia’s population is Muslim.

Over twenty individuals are still missing. Friday, Suharyanto, the chief of Indonesia’s disaster mitigation agency, stated that the search will continue, despite rescuers’ low prospects of finding survivors.

Aftershocks and rain continue to impede search operations, restricting the use of heavy equipment in some areas, according to a search and rescue officer.

Rescuers continued to search with shovels in a landslide-affected region where nine dead were discovered on Friday while wearing orange shirts.

Indonesia is one of the most earthquake-prone countries in the world, with frequent occurrences of large earthquakes offshore where fault lines run.

Monday’s earthquake was especially lethal since it struck a heavily populated area at a shallow depth of 10 kilometers. According to officials, poor construction standards also contributed to the collapse of buildings, which resulted in several fatalities.